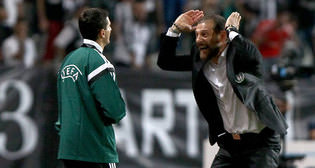 by Daily Sabah with Agencies Aug 20, 2014 12:00 am
Turkey's soccer giant Beşiktaş will be without manager Slaven Bilic for the second leg of the Champions League play-off match against Arsenal after he was sent to the stands for protesting a failure to penalize an Arsenal player for a foul on one of his players.

Bilic was given a minimum one-match ban by UEFA but expressed satisfaction with the 0-0 result that came in Istanbul. "It was a great game of football; it was not a dull 0-0. I am really proud of my players, they stuck to their plan," Bilic said. "From my point of view we were closer to beating them."

Bilic said he had apologized to the referee at the end of the game for the argument that saw him sent off but insisted he had not misbehaved. "It was not swearing, I was just unhappy and after the game I apologized. Maybe I over-reacted, my mistake, nothing serious happened," he said.