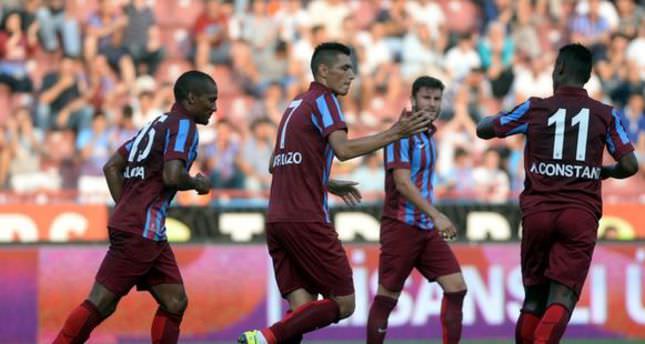 Turkish football clubs are storming in Europe. On Tuesday, Beşiktaş drew against English giants Arsenal 0-0. Although Beşiktaş lost its advantage as the home side without a goal to show for their efforts, they were the first team to ever not be defeated by Arsenal in a Champions League qualifier.

Arsenal had come into the game with a 100 percent record in Champions League play-offs, having played 12 and won 12. After Beşiktaş, Turkey's other two representatives in Europe, Trabzonspor and Kardemir Karabükspor took to the field on Thursday night and both claimed victory in the first leg UEFA Europe League playoff matches.

Trabzonspor beat Russian team Rostov 2-0 at home with goals from Algerian defender Carl Medjani tapping in the opener, his first goal for the club, on 37 minutes. New signing Oscar Cardozo doubled the lead in 73rd minute when he intercepted the ball outside the penalty area and chipped the ball over Rostov's Croatian goalkeeper Stipe Pletikosa. Kardemir Karabükspor managed a slender one goal victory over French opponents Saint-Etienne 1-0 at home. Congolese forward Domi Kumbela got the solitary goal in the 60th minute with a vicious drive that clipped the post on the way in. St Etienne handed Kardemir Karabükspor their maiden European victory. Both clubs represent coal mining communities. Both Karabükspor and Trabzonspor take an advantage into their second legs. Elsewhere, Erik Lamela came off the bench to set up both goals as Tottenham beat AEL Limassol 2-1 in the Europa League play-off, first leg in Larnaca.

The Greek Cypriot League runners-up troubled the Premier League side with their high-pressure, counter-attacking tactics and took the lead on 14 minutes when Adrian Sardinero took advantage of a Paulinho lapse in midfield to glide through the Tottenham back four and beat goalkeeper Hugo Lloris. But Tottenham manager Mauricio Pochettino opted to bring on the Argentine winger in the second half, and the former Roma player dazzled as he set up late goals for Roberto Soldado and Harry Kane. The competition has taken on an added importance for Tottenham because this year's winner qualifies for next seasons Champions League, and Lamela's cameo ensures that the Premier League side will be favourites to finish the job in next Thursday's second leg at White Hart Lane, and qualify for the group stages for the fourth successive season.

In the other match of the night, goalkeeper Allan McGregor gifted Lokeren the goal which saw them defeat Hull 1-0. The Belgian side will take the advantage into the return leg at the KC Stadium. And once-mighty Lyon suffered huge embarrassment with a 2-1 home defeat by unheralded Romanians Astra Giurgiu in their Europa League play-off first leg. Lyon, who won seven French titles in a row between 2002 and 2008 and made the Champions League semi-finals in 2010, took the lead thanks to Steed Malbranque on 25 minutes. However, Nigerian Kehinde Fatai's goal after the break and a Constantin Budescu penalty nine minutes from time boosted Astra. In other notable first-leg results, Moldova's Zimbru Chisinau surprised Greece's PAOK 1-0 at home. Sweden's Markus Berg scored all four goals in Panathinaikos' 4-1 win in Greece over Danish league leaders FC Midtjylland while Legia Warsaw, thrown out of Champions League qualifying over an ineligible player, won 1-0 at Kazakhstan's Aktobe.
Last Update: Aug 23, 2014 2:00 am
RELATED TOPICS