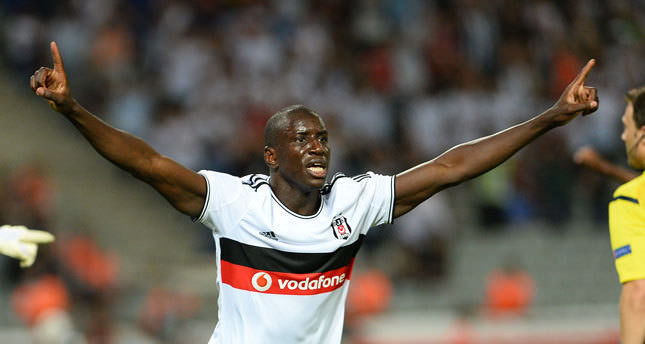 by Daily Sabah Aug 26, 2014 12:00 am
Beşiktaş's Senegalese star Demba Ba has already begun the trash talking ahead of Wednesday's crucial Champions League match against Arsenal claiming the English team were "alarmed" by the Turkish side in the first leg. Last week, Beşiktaş drew 0-0 at home with English Premier League side Arsenal in the first leg of their UEFA Champions League play-offs. Speaking to BJK TV, Demba Ba said the team will do everything they can to get a place in the group stages during the return match at the Emirates Stadium in London. He said that Beşiktaş played well against Arsenal in the first leg. "Our previous performance alarmed them. A few tactics might change the next game's result. We will be ready for it. There are great supporters behind them, but we have already showed what we can do," Ba continued.

The forward believes that Beşiktaş's supporters will not give the home side a moment of rest during the road game. "Our supporters will fill tribunes and cheer more than the Arsenal fans. We are going there to realize a dream. Beşiktaş will continue to fight for their supporters until our uniforms are soaked with sweat. We have reason and belief to realize our dream. We will try to achieve this there [in London]," he said. Ba also expressed his happiness at his transfer to Beşiktaş as well as residing in Istanbul.

"I was honored to receive an offer from the club. It is a pleasure to be here. I never hesitated in coming to Beşiktaş and was excited to arrive here. I have already established good relations with everyone here," he said. "Before I came here, many people said Beşiktaş have Turkey's best supporters. I was greatly influenced by their interest and atmosphere in the stadium. I am trying my best to respond to them. One of the other greatest things is to wake up with the sound of Adhan every morning. It makes me feel good," he concluded.
Last Update: Aug 26, 2014 1:54 am
RELATED TOPICS