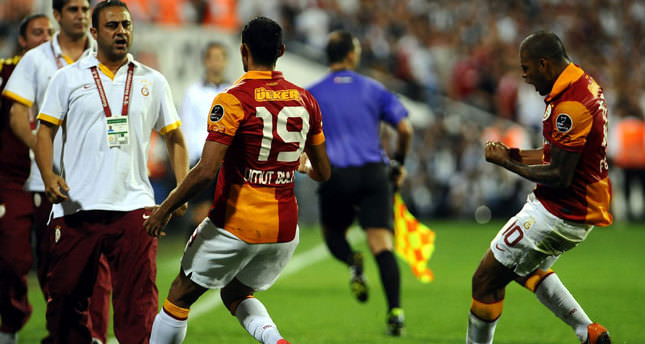 Galatasaray took an early lead in the new Spor Toto League season on Saturday night after they beat Bursaspor 2-0 away from home while Beşiktaş shook off their midweek European defeat with a 1-0 win over Mersin İdman Yurdu. Aydın Yilmaz and Olcan Adın were on the scoresheet for Galatasaray to give new manager Cesare Prandelli a win his first league game in charge of the club. The Italian couldn't have asked for a better start to the league campaign with the win giving Galatasaray an early lead in the table. The victory also provided a certain catharsis for Galatasaray who had endured a difficult week after losing in the Super Cup to rivals Fenerbahce on penalties, followed by a public spat between Fener goalkeeper Volkan Demirel and Felipe Melo, with the former calling the latter a "dog".

The Gala fans in Bursa came out in support of their Brazilian midfield maestro, with banners and chants. Demirel had said, "the Municipality should clean up these dogs from the streets or I will have to deal with it" referring to Melo. The incident has been dominating the sports pages of Turkish papers for a week. Bursaspor fans barked like dogs while Galatasaray fans supported Melo shouting out "We love you Melo". The player thanked the fans by making a soldier salute and putting his hand on his heart. Later on, Galatasaray fans shouted out "we are the soldiers of Melo" for a while. Prandelli started the Bursaspor match with a surprise 11 players. Three Galatasaray players did not go in to the field to warm up.

Olcan Adın, Umut Bulut and Furkan Özçal, who were among the six players that Prandelli gave chance in the bench, did not go in the field to warm up before the match. Bruma made his league debut for the club but was largely ineffective and was later replaced in the 68th minute by Adın, who netted in injury time.

Elsewhere, Beşiktaş put their midweekdefeat to Arsenal behind them with a 1-0 win over newly-promoted Mersin İdman Yurdu. Shorn of star players Demba Ba and Oğuzhan Özyakup, Beşiktaş made hard work of the newly-promoted team. Cenk Tosun scored the only goal of the game two minutes before half time to kick off Beşiktaş's league campaign.

One of the opening weekend's big winners was Eskişehirspor who overcame Konyaspor at home 2-1 thanks to a late second-half penalty. Romanian Gabriel Torje gave the visiting side the lead with a 14th minute strike. The hosts labored before Hürriyet Gücer restored parity 20 minutes into the second half. Erkan Zengin secured the points for Eskisehirspor with a penalty 14 minutes from time. In Saturday's other fixture, 10-man İstanbul Başakşehir earned a 1-1 draw with Kasımpaşa in Istanbul. Jeremy Perbet put Istanbul ahead on the 35th minute before Adem Büyük equalised on the stroke of half time. Istanbul Başakşehir were reduced to 10-men early in the second half when Rajko Rotman was given a straight red card. Friday saw the league season officially begin with Akhisar Belediyespor winning 2-1 against Balıkesirspor while Çaykur Rizespor only managed a 1-1 draw with Gençlerbirliği. Saidi Ntibazonkiza got Akhisar's season off to the perfect start, netting in the sixth minute before Alanzinho equalised half an hour later. Mehmet Akyüz's second half stroke gave the away side all three points. In Rize, Guido Kocer gave Gençlerbirliği a 31st minute lead before Ümit Korkmaz salvaged a point for the some side in the 61st minute.
Last Update: Sep 01, 2014 2:17 am
RELATED TOPICS