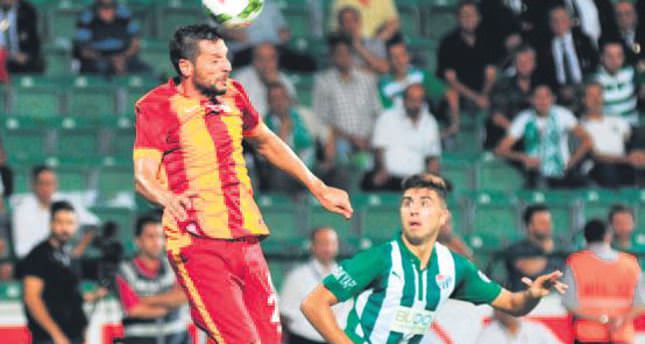 by Daily Sabah Sep 02, 2014 12:00 am
Fenerbahçe got their 2014/15 season off to a thrilling start with a dramatic 3-2 win over Kardemir Karabukspor. Twice the reigning champions took the lead only for Karabukspor to equalize. But Pierre Webo's 81st minute strike settled a riveting encounter in Istanbul as the club's African contigent saved the day. Buoyed by their Super Cup win last week over bitter rivals Galatasaray, Fenerbahçe shot out of the blocks early on with Emmanuel Emenike striking after eight minutes.

Dutch midfielder Dirk Kuyt played the Nigerian through on goal before the striker put the ball between Boy Waterman's legs. Just under half an hour later, Domi Kumbela equalized for the away side. The goals poured in after the break with Moussa Sow getting on the scoresheet eight minutes after the restart before Michal Kadlec put the ball in his own net to give Kardemir Karabukspor a life line. Webo decided the points late on when he nodded in Raul Meireles' cross. Elsewhere, the much-fancied Trabzonspor drew against Kayseri Erciyesspor 0-0 on Sunday in a disappointing performance while Gaziantepspor scored an opening weekend win. The team from the south east took Sivasspor away from home and came from a goal behind to take three valuable points for a team that narrowly avoided relegation last season.

Former Portsmouth striker John Utaka gave the hosts the lead just after half time before Muhammet Demir bagged a brace, netting in the 72nd and 78th minutes. The end of the first weekend of Turkish top flight football sees Galatasaray sitting at the top of the table on goal difference following their 2-0 defeat of Bursaspor. Burak Yılmaz and Olcan Adın's goals secured victory for the Istanbul club on Saturday. Beşiktaş's single goal was enough to see off Mersin Idmanyurdu away from home, with striker Cenk Tosun scoring just before half-time in Saturday's match.
RELATED TOPICS