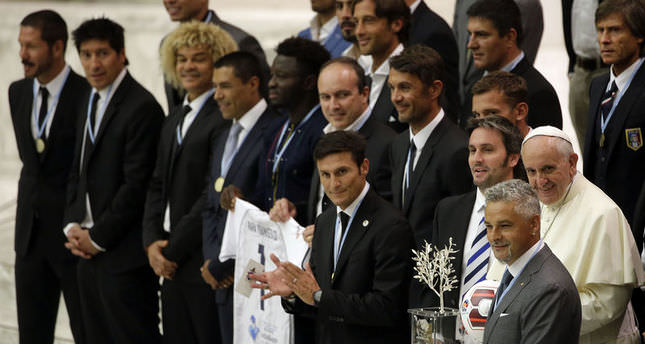 by Daily Sabah with Agencies Sep 03, 2014 12:00 am
Diego Maradona and Roberto Baggio, Fenerbahçe's midplayer Emre Belözoğlu and Uruguayan goalkeeper Fernando Muslera were among soccer stars who played in an charity match backed by Pope Francis on Monday night. The Argentine pope, an avid soccer fan, did not attend the match but had an audience with both teams earlier in the day and also broadcast a message on the big screens at Rome's Olympic Stadium ahead of kickoff. As well as promoting peace, the game raised money for at-risk kids.

The two teams were named after Scholas Occurrentes an educational entity launched by the pope and Zanetti's Pupi foundation. Pupi managed by Argentina coach Gerardo Martino recovered from two goals down at halftime to win 6-3 in an entertaining match. Maradona played the entire 90 minutes and the highlight of the night was the Argentine legend's delightful lobbed pass that set up Baggio's goal.The star-studded lineups included past and present players such as Carlos Valderrama , Diego Simeone, Alessandro Del Piero and Gianluigi Buffon.