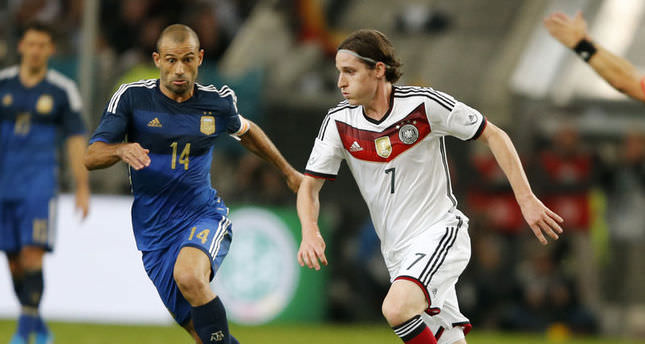 by Associated Press Sep 05, 2014 12:00 am
Angel di Maria set up three goals and scored the fourth himself as Argentina trounced Germany 4-2 in their friendly game Wednesday to get a small measure of payback after losing to the host in the World Cup final. Argentina was up 4-0 after just 50 minutes to dampen the home side's World Cup title celebrations in its first game since winning the final 1-0 in extra time in Brazil in July.

With Lionel Messi absent due to a right leg injury, Di Maria assumed the instigator's role, setting up Sergio Aguero in the 21st minute, Erik Lamela's outstanding volley in the 40th, and Federico Fernandez' headed goal two minutes after the interval.

Di Maria, who completed his move to Manchester United from Real Madrid last week, crowned his performance in the 50th with a chip over substitute Germany 'keeper Roman Weidenfeller, after a great run set up by Argentina captain Javier Mascherano. Andre Schuerrle pulled one back from a rebound two minutes later before Mario Goetze, who scored the winning goal in the World Cup final, made it 4-2 with a deflected shot in the 78th. Both sides fielded much-changed lineups to the ones that contested the biggest game in world football in Rio de Janeiro's Maracana stadium 52 days earlier.