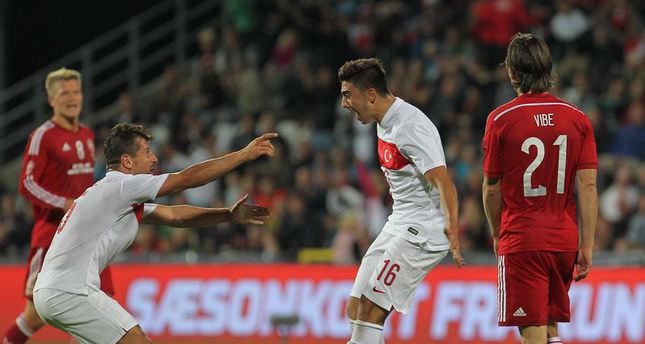 by Daily Sabah Sep 05, 2014 12:00 am
The Turkish national team sealed a 2-1 victory over Denmark in Wednesday's friendly for their first win over the Scandinavian country for over two decades. The last time Turkey beat the Danes was back in 1992 in a friendly game, with Turkey coming out 2-1 winners. Both team used the match as a dress rehearsal for Euro 2016 qualifiers.

Bursaspor's teenage midfielder Tufan came off the bench with 14 minutes remaining of the clash, and he opened his full international account in style with an unstoppable 25-yard drive that arrowed past Leicester City's Kasper Schmeichel.

The 19-year-old's wondergoal completed a remarkable turnaround for Turkey, who had trailed to a Daniel Agger penalty at the break following an abject first-half display. However, Olcay Şahan drew Fatih Terim's side level 10 minutes after the interval and Tufan had the final say to take Turkey into their first Euro 2016 qualifier in Iceland on the back of a win. The Turkey side - shorn of rested star names Arda Turan and Hakan Çalhanoglu, who were both on the bench - struggled to cope with Denmark in the opening stages, although the hosts found it tough to penetrate Terim's compact team. The friendly against Denmark served Turkey as preparation for the UEFA Euro 2016 qualifying Group A match to be played against another Nordic opponents Iceland on September 9.