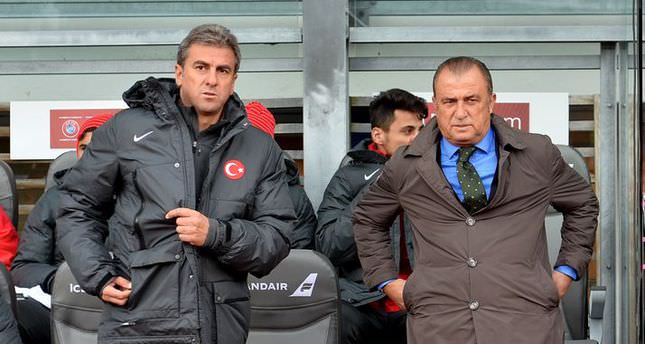 by Daily Sabah Sep 11, 2014 12:00 am
Turkey were humiliated 3-0 by home team Iceland in the UEFA Euro 2016 qualifying group game in the capital city of Reykjavik on Tuesday. Icelandic midfielder Gylfi Sigurdsson and Ajax forward Kolbeinn Sigthorsson scored for Iceland in the second half, giving the minnows a win in the opening game of their qualifying campaign. Bodvarsson found the net with a header from a corner kick for the lead in the first half. Down 1-0, Turkey were reduced to 10 men in the second half after Bayer Leverkusen's Ömer Toprak received a second yellow card after a handball and was sent off. After the match, Turkish national team coach Fatih Terim said his side played "very badly" and deserved to lose. Terim also accused some footballers but didn't name any names. "We must be realistic. I don't want to give a specific name. But I'm disappointed by some of our players. I didn't expect such a result. National teams are everybody's teams. The ones who deserve to play will wear the national team's jersey. We lost a match. We must see our faults and move on. A 100 percent performance is a must if you play in national team."

He also stressed that being reduced to 10-men played an important role in defeat. "If Ömer Toprak was not shown a red card, we could have controlled the game. Despite our efforts we could not change the result. Now, the next match against Czech Republic has become more important for us." In other Group A matches, Czech Republic defeated Netherlands 2-1 in Prague.Vaclav Pilar came off the bench to score a stoppage-time winner as the Czech Republic beat the Netherlands 2-1 in their opening Euro 2016 qualifying Group A fixture on Tuesday. The Dutch finished third at the World Cup in Brazil but have since seen Guus Hiddink replace Louis van Gaal as coach and his second spell as national coach had begun with a 2-0 friendly defeat to Italy last Thursday. "It's a bitter loss when you lose in the last minute," said Hiddink, who started with the same 5-3-2 system the Dutch had used in Brazil but switched back to his favoured 4-3-3 after the first Czech goal. Netherland, who won nine and drew one of 10 qualifiers for the World Cup, face Kazakhstan at home and Iceland away in October. Moreover Kazakhstan and Latvia drew 0-0.
RELATED TOPICS