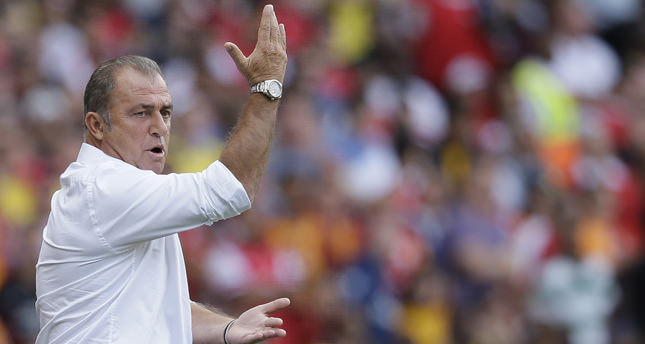 by Arda Alan Işık Sep 15, 2014 12:00 am
"Despite the first goal, we could have coped with the situation, but the wind totally threw us off balance," said Turkey coach Fatih Terim, after a humiliating loss in the EUFA Euro 2016 qualifiers against Iceland, Tuesday last week. Furthermore, he pledged to drop "so-called" stars because of their lack of will. Turkey's "toprated" football columnists also approved his inference, which indicates player-based faults caused this catastrophic result. However, interestingly, none of those former football players are arguing about Fatih Terim's failed strategy and tactics.

Apparently, the elders of the Turkish football community have no interest in a systematic approach to football. Their negligence of strategy is showing us that Turkish football is still obsessed with individual talent. Nonetheless, contemporary European football is driven by a different paradigm - a coach-based approach. Since the invention of total football, Europe has changed its perception of the most crucial element of the game. It was believed that players individually change the course of the game until the mid-90s. When Johan Cruyff invented Dutch total football with "Catalan tiki-taka," a new era had started. Today, football is accepted as a set of strategies and tactics designed by coaches and performed by players.

However, even the most iconic figure of Turkish football, Fatih Terim, seemingly has no idea about a strategy which would constitute a successful future. Therefore, we can say that Turkish football is still being driven by primitive means. First of all, Terim and former football players in the media should acknowledge that new football has new principles. Since football is a team game, it demands that an organization must expect all players' active participation everywhere on the pitch.

Thus, the main question is how your players control and use the field. At this point, classical position assumptions (such as defender, midfielder, et cetera) have no functionality. A player should be able to satisfy "the requirements of the game" in every position on the pitch. Only then can a coach design a strategy and tactics to reach an ultimate goal. There is a variety of tactics used to score a goal in a game, but the most valuable ones are the ones a team can repeat. If a tactic is repeatable, it means it is systematically shaped and convenient for your strategy.

After control and use of the field, the second most important thing is dominating ball possession. The ball is the subject of your strategy and thus, it has great importance and cannot be lost to the opponent due to reckless moves, such as, selfish dribbling, rushed individual attacks or long balls. A team must be patient and loyal to its strategy when it comes to offensive organizations.

The best way to create a mature offensive game is by moving your "back" players forward ('back player' is a much more appropriate term than defender). This move will not only press your opponent to its half of the field and increase the chance of scoring a goal but it will also eliminate opponents' offensive organization.

Unfortunately, Turkish football is far from perceiving football this way. If Fatih Terim and Turkish football authorities want to qualify for the European Championship, they must undergo self-criticism and work on the new principles of the game.
Last Update: Sep 15, 2014 2:05 am
RELATED TOPICS