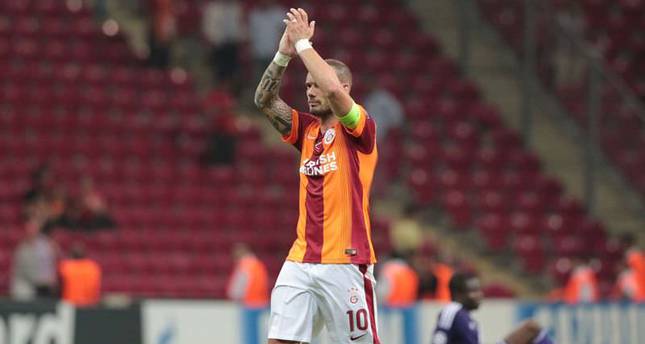 Turkish club Galatasaray needed a late goal to snatch a 1-1 draw in UEFA Champions League Group D match at the Türk Telekom Arena. After a slow start, fans are already getting on the back of new coach Prandelli

With Galatasaray manager Cesare Prandelli already under pressure after just two league games, the Turkish giants slumped to a 1-1 draw with Belgian side Anderlecht in the UEFA Champions League Group D on Tuesday night. Fans were left infruriated after Gala needed a late equalizer to snatch a draw at home to the group's weakest team, reacting angrily to the tepid performance, even whistling midfielder Selçuk İnan - who has been in particularly poor form of late - throughout the match. Galatasaray's Uruguayan goalkeeper Fernando Muslera reacted angrily to supporters' jeers while Turkish football commentators harshly criticized Italian coach Prandelli and his players.

"We knew Selçuk would be whistled. Prandelli is making the wrong choices," wrote Levent Tüzemen in his column. "Galatasaray will play all its matches under pressure" said Gürcan Bilgiç, another Turkish commentator. Rıdvan Dilmen said that just getting a point out of the game was good for Galatasaray considering the performance they put on. With the criticism pouring in, Cesare Prandelli defended Selçuk İnan and called on everyone at the club to get behind the players. "It happens to every footballer. A footballer may have good days and bad days. What's important is to act like a team and support each other" he said. Though Prandelli can be forgiven for asking for more support, his side's performance on Tuesday was objectively under par.

On the field, Dennis Praet found the opening in the 52nd minute, gathering a cross on the left, passing two players along the edge of the penalty area and firing in a shot to Galatasaray keeper Fernando Muslera's right, which flew in off the post.

The home side had to wait until injury time to equalize when Galatasaray's Aurelien Chedjou broke through the defence on the left of the area and found Burak Yılmaz who shot past Anderlecht keeper Davy Roef from a few meters out, much to the relief of the home side. In an open match, both sides had chances to give their campaigns a positive start with Yılmaz failing to connect properly with a pass across the area in the eighth minute.

The visitors sprang into life midway through the first half with Matias Suarez firing in a cross from the left and Ibrahima Conte sending a shot back across the goal and out of play. Two minutes later Aleksandar Mitrovic forced a save from Muslera. In the 29th minute, a free kick for the visitors found Anderlecht defender Olivier Deschacht but he directed his shot straight at Muslera. Galatasaray responded several minutes later with a couple of efforts, including a shot from Felipe Melo in the 35th minute that was deflected wide.

Shortly after Praet's goal, Aleksandar Mitrovic had a chance to double the lead but fired a close-range shot wide. Galatasaray then resumed the attacking mode in which they had started the half, striker Goran Pandev firing in a shot which was saved by Anderlecht keeper Roef. The home side kept up the pressure in the final stages and had a string of scoring opportunities before Burak capitalised on his chance in added time. Elsewhere, Real Madrid started the defense of its Champions League crown with an emphatic 5-1 victory over Basel on Tuesday, while Liverpool celebrated its return to Europe's top club competition with a dramatic 2-1 win against Bulgarian side Ludogorets.

In Group A, former Manchester United striker Carlos Tevez ended his European goal drought as he scored twice in a 2-0 Juventus win over Malmo, for his first goal in the competition since April 2009. In the group's o t h e r game the shock came from Athens, where Olympiakos defeated Atletico, with Arthur Masuaku scoring a superb strike from outside the area and Ibrahim Afellay scored early goals. Mario Mandzukic pulled one back before Kostas Mitroglou extended the hosts's lead. Antoine Griezmann's late strike from close range did not prevent Olympiakos from earning the three points.

Monaco won against the run of the play with a 1-0 win over Leverkusen in Group C courtesy of Joao Moutinho' goal, while Benfica's 51-match unbeaten home record in all competition came to an end. Hulk and Axel Witsel scored first-half goals to give Zenit the win against a 10-man Benfica as goalkeeper Artur was sent off in the 18th for obstructing Danny. In Group D, Borussia Dortmund strikers Ciro Immobile and Pierre-Emerick Aubameyang scored either side of halftime to give their side a 2-0 with over Arsenal. Immobile, signed from Torino in the offseason, sprinted almost half the length of the pitch and held off Arsenal defender Laurent Koscielny before dispatching a low shot inside the far post just before the break. "I'm very happy to score, that we won, because it hasn't been easy for me to settle into the Bundesliga. I was able to make my teammates happy," Immobile said.
Last Update: Sep 18, 2014 12:04 pm
RELATED TOPICS