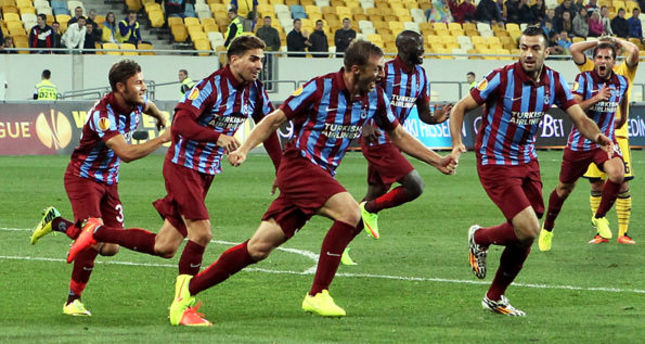 Thanks to their Greek star's goal, Trabzonspor beat Metalist Kharkiv in the UEFA Europa League. If Trabzonspor had lost their game, Turkey, which ranks 11th, might have been overtaken by Greece, which ranked 12th in the UEFA country ranking

Turkey enjoyed mixed results in the UEFA Europa League on Thursday night with Turkish giant Beşiktaş suffering a disappointing draw while Trabzonspor grabbed a last-minute win. The opening games of the Europa League saw Beşiktaş draw with Greece's Asteras Tripolis in Istanbul while Trabzonspor beat Ukraine's Metalist Kharkiv away from home. What's more important is that Turkey kept its position in the UEFA country ranking, ahead of Greece, as a result of the night's games.

If Trabzonspor had lost their game, Turkey, which ranks 11th, might have been overtaken by Greece, which ranked 12th. Turkey has 29,600 points in the ranking while Greece has 29,100. Because of the unsuccesful results from Galatasaray and Beşiktaş in Europe, Greece nearly succeded in making up the difference. Ironically, however, Greek star Avraam Papadopoulos' last-minute goal for Trabzonspor maintained Turkey's point advantage over Greece. If Papadopoulos had not scored the goal, the difference between Turkey and Greece might have decreased by 0.300 points. Why is ranking 12th so important?

But the home team equalized through Ukrainian forward Volodymyr Homenyuk's header in the 61st minute. In the last minute of injury time, Trabzonspor scored the winning goal as a last ditch attempt when their Greek centre-back Avraam Papadopoulos found the net from close range after his teammate Mustapha Yatabare headed on a freekick, clinching victory for the Turkish side. Thursday night wasn't quite so successful for Beşiktaş. Beşiktaş's Gökhan Töre worked a sweet give-andgo with Oğuzhan Özyakup to slot his shot into the bottom far corner inside 33 minutes to give the home side the lead. The equalizer arrived after a sweet slip-andcross from Martin Rolle for Facundo Parra to volley home off balance.

The home side played in a safe 4-2-3-1, a formation that actually worked well for them as they did score the opening goal. However, when fatigue kicked in late in the second half, they were caught out on the counter against the opponent's 4-3-3, grabbing a deserved equalizer. Besides fatigue, Beşiktaş's bad luck in front of goal also took away their confidence as lady luck failed to support them just once more. Next up they will visit Tottenham Hotspur who shared the spoils as well in a scoreless draw at Partizan Belgrade. Beşiktaş's Croatian coach Slaven Biliç said, "We should have pulled the plug after the goal but we did not manage it."

Elsewhere three-time European champions Inter Milan opened their Europa League campaign with a hard-fought 1-0 win away to Ukrainian side Dnipro Dnipropetrovsk, while defending champions Sevilla had an easier 2-0 win against Feyenoord on Thursday.

Inter top Group E after Saint-Etienne's 0-0 draw away to Azerbaijan side Qarabag Agdam, while Sevilla are level at the top of Group G with Standard Liege, who beat Rijeka of Croatia by the same score. Belgian winger Dries Mertens scored twice as Napoli rallied to beat Sparta Prague 3-1, with Argentina striker Gonzalo Higuain equalizing from the penalty spot before setting up Mertens' first. But Napoli sit second in Group I because Swiss side Young Boys routed Slovan Bratislava 5-0. An own goal from Ricardo Rodriguez, efforts from defenders Seamus Coleman and Leighton Baines, and a late strike from Belgium forward Kevin Mirallas helped Everton crushed German side Wolfsburg 4-1 in Group H. Lille drew 1-1 with Russian side Krasnodar in the other game.