'Gala not the same without Fatih Terim' 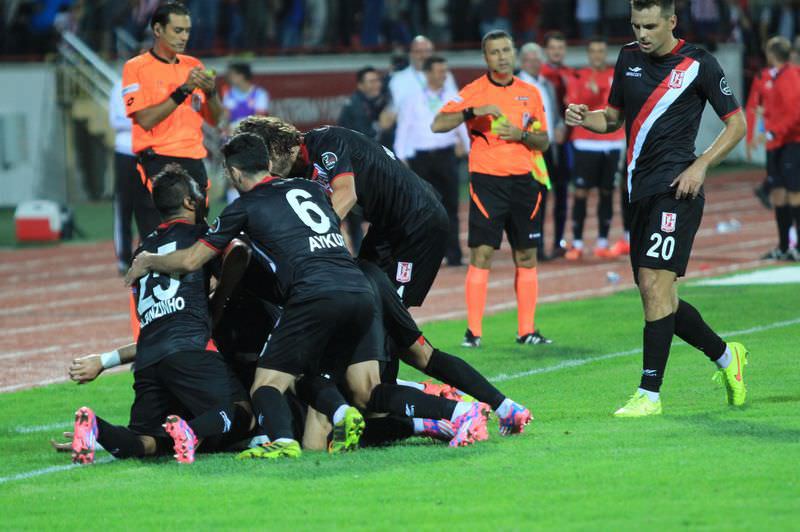 Gökhan Ünal, who helped Balıkesirspor to a 2-0 win over Galatasaray on Saturday, has criticized the Istanbul giants, claiming they were a better team under Fatih Terim.

Gala slumped to their first league defeat of the season just days after the club announced a crisis meeting that could possibly change the club's leadership.

Goals from Ünal and Sercan Yıldırım guaranteed another night of misery for the Yellow Reds. Galatasaray have endured a miserable start to the season that has included a defeat to Fenerbahçe in the Super Cup, a bore draw against Eskişehirspor and a last-ditch draw at home to Anderlecht in the Champions League.

The defeat only further adds pressure to under-fire coach Cesare Prandelli. Adding fuel to the fire, Ünal said that Galatasaray are a worse team now than they were under legendary manager Fatih Terim.

"Galatasaray aren't the same team they were under Terim," said Ünal. "If you look at the team, they have some great names but they are not a great team. Under Terim the players used to fight for the shirt but they don't anymore.

"After Fatih Terim, there has been a great fall in Galatasaray, if you look at Gala as their name they're good with great players, but as a whole they're not great. They have had a bad start in the league."

After two defeats in their first two games, Ünal was happy to see Balıkesirspor get to winning ways.

"We didn't play well in the first two games but we weren't so bad that we deserved to lose," said Ünal. "The goals came from individual mistakes. Today we played well, and we won by applying our tactics to the game. We have inexperienced players and with more harmony in the team we will be better."

Despite being a registered player for Galatasaray, Yıldırım was more than happy to stick a goal past his employers.

"I'm very happy I scored," said the striker. "We have upset our fans in the last two weeks because we were losing and we had to find an exit to the problems. We have gained our confidence back by winning a difficult game. People said we would be an average team after those two losses, I'm so happy that I scored and also I congratulate Gökhan."

The club still endures a bizarre love/hate relationship with Terim. A hero to the fans that enjoyed so much success under the coach – most notably the 2000 UEFA Cup, Turkey's only European trophy – but a villain to club president Ünal Aysal, who recently refused to mention Terim by name when referring to him at a recent press conference.

On Saturday night, Galatasaray were undone by good work on the break from the hosts. After soaking up almost constant Gala pressure in the opening 10 minutes, the away side were undone by Yıldırım, who is currently on-loan from the Yellow Reds, who made a purposeful bursting run from just inside the Gala half. Thrusting into the area, Yıldırım lashed a shot which cannoned off Semih Kaya before evading a wrong-footed Fernando Muslera.

Galatasaray did manage to get the ball into the net after 37 minutes but Burak Yılmaz had strayed into an offside position before netting. The misery only increased a minute before half time when Ünal's close-range effort evaded Muslera.

The away side naturally dominated the second period but were unable to turn possession into goals, leaving them with four points after three games, mustering just two goals.

Galatasaray will face Sivasspor in the league next Friday when they can begin to gain back confidence ahead of big games against Arsenal in the Champions League and Fenerbahçe in the league.

Elsewhere, Mersin İdmanyurdu climbed to joint second after a 2-0 win over Çaykur Rizepsor.

Captain Servet Çetin opened the scoring after 13 minutes before striker Sinan Kaloğlu struck in the last 10 minutes to claim their first win of the season.

In Saturday's other game, Akhisar Belediyespor came from behind to win 2-1 at Erciyespor. Cenk Ahmet Alkılıç gave the home side the lead after 33 minutes, giving the hosts the lead going into half time. But Greek striker Theofanis Gekas pulled the visitors back into the game just after half time before securing all the points with a last-minute strike.