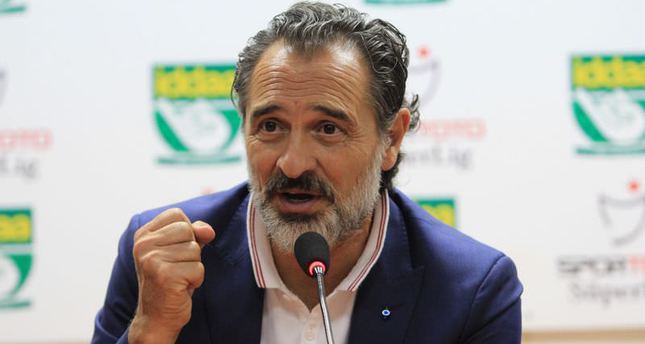 by Arda Alan Işık Sep 24, 2014 12:00 am
It took a long time for Cesare Prandelli to be accepted as an "elite" coach in Italian football. Although his "extraordinary" five years in beautiful city of Florence, in which ACF Fiorentina became a real "nightmare" for the big guns of Italian football, he had to wait five years to be assigned as Italian National Team coach. However, the "shining" point about his success was, he took fifth place in the League despite the fifteen point handicap of Fiorentina caused by the famous "Calciopoli" match fixing scandal in 2007. Moreover, he managed to raise a generation while creating a team that competes for the top.

He was also the "starring actor" in Italy's 2012 European Championship success. Even if, he worked for maybe the most conservative football nation in the world, he did a great a job about implementing his reformist plans. After 2006 World Cup achievement and defensive minded classic Italian coaches, "Azzurri" finally found a new spirit with Cesare Prandelli. He might not be a "magical" tactician like Josep Guardiola or Marcelo Bielsa, but he knows how to create a sustainable game. Furthermore, he could make his new step in Galatasaray. I believe his winning formula lies in his interview which he gave to GSTV on July:

"Ball domination is crucial for us. If we control the ball, we can control the game. Of course, this is only the beginning. We aim to create an offensive team. However, this does not mean we are going to play with four strikers. We will press our opponent, take rebounds and make through balls."

Apparently, Galatasaray is making progress as a "beginner" in a systematic game. On Saturday night's match, Galatasaray was impressively effective about ball domination against Balıkesirspor, when compared to other Turkish teams. From goalkeeper Fernando Muslera to playmaker Selçuk İnan, all team tried to avoid simple lost balls. Thus, Galatasaray is getting ready for an offensive organization that would make a huge difference with others including Fenerbahçe, Beşiktaş and Trabzonspor.

However, Galatasaray players still have a lot of fundamental problems which could lead to "fatal" conclusions for Prandelli's plans, just as illustrated in Balıkesirspor game. This is because most of Turkish players do not learn the basics of the game at youth team level, such as; creating an pass option for teammates, passing the ball to the natural side of teammates or using the momentum of the ball. Those skills are required for even most structureless and occasional games. Hence, Prandelli should approach differently to its players than he did in Italy. Shamefully, he has to do what needed to be done to these players in their childhood. This is the only way that Prandelli can work for a long time in Istanbul and do what he is familiar to do; raise a generation.

In short period of time, it is understandable why Prandelli wants to work with players who is ready for his system. Therefore, Goran Pandev and Blerim Dzemaili can be very helpful for both Prandelli and their teammates in this season. But in the long term, Galatasaray must be a "self-sufficient" team. Fans should not feel disappointed after bad results in a row, they must be patient. If Galatasaray community give enough credit and time to Prandelli, a new era can begin.

Fernando Muslera has to add his game some "sweeper" skills. When Galatasaray presses its opponent and bring forward its back players, he must control a large area which can be used by opponent for counter-attacks. Manuel Neuer could be the best goalkeeper in this job. Since he controls the back of the game, it gives his teammates confidence to move forward. Thus, he plays a critical role in Bayern Munich's offensive strategy. On the other hand, Muslera has remarkably improved his foot skills. He does not randomly kicks the ball anymore, unlike he used to do when Fatih Terim was in charge. It is crucial because game starts in the hands of goalkeepers. If he wastes the ball, whole strategy collapses from the very begging.