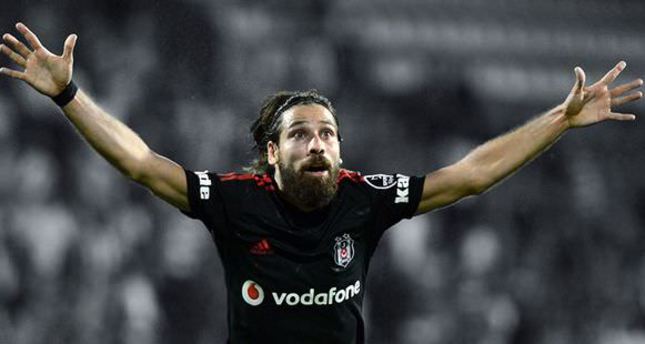 by Daily Sabah Sep 24, 2014 12:00 am
Spor Toto Super League was completed on Monday night with Istanbul club Beşiktaş toppling Bursaspor 1-0 away from home thanks to a late winner scored by Turkish midfielder Olcay Şahan in the 86th minute. The win moved the Black Eagles to third place in the standings with seven points. Beşiktaş secured their last four points in their last two games thanks to goals from Şahan.

The star also scored goal in the 81st minute against Çaykur Rizespor in the second week of the Super League, helping his team to draw 1-1. On Monday night, he scored again this time against Bursaspor and his goal brought Beşiktaş three valuable points to keep them level with archrivals Fenerbahçe, who defeated Gaziantepspor, at the top of the table. Meanwhile, Trabzonspor - who have been labeled as the "transfer champion" after a busy and productive transfer window - barely snatched a 1-1 draw against Istanbul Başakşehir thanks to a stoppage-time winner in Monday's away match. Former Benfica striker Oscar Cardozo's equaliser from a penalty kick in injury time saved Trabzonspor. The home team, Istanbul Başaksehir, had taken the lead when Bosnian winger Edin Visca scored in the 47th minute. Defending Turkish league champions Fenerbahçe narrowly defeated Gaziantepspor 1-0 on Sunday night at home.

Fenerbahçe increased moved onto seven points and climbed to second place in the league table. Turkish Spor Toto Super League newcomers Balıkesirspor defeated Istanbul giants Galatasaray 2-0 on Saturday in Balıkesir province. Despite Galatasary's domination in the second half, their efforts were futile in scoring, giving the newcomers their first three points and leaving Galatasaray with four points after the third game of the season. Meanwhile league leaders, Akhisar Belediyespor came back against SAI Kayseri Erciyesspor 2-1 thanks to a brace scored by Greek forward Theofanis Gekas in 53rd and 90th minute.
Last Update: Sep 24, 2014 10:45 am
RELATED TOPICS