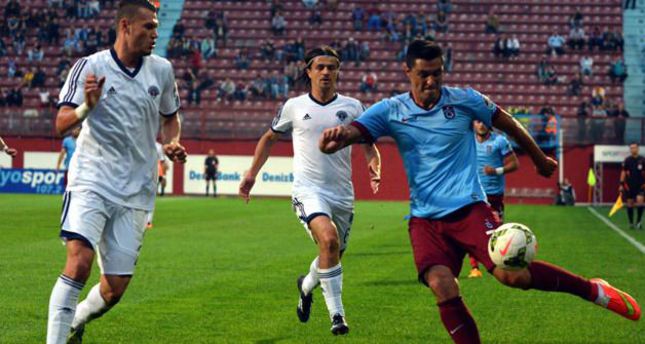 by Kenny Laurie Sep 29, 2014 12:00 am
Trabzonspor continued their trend of disappointing draws, finishing 1-1 with Kasımpaşa for their fourth draw in as many games in the new season. The Black Sea team collected four points from their first four games of the season with draws against Erciyesspor, Fenerbahçe, Istanbul Büyükşehir Belediyespor and Kasımpaşa. After a huge outlay over the summer, including the star signing of Oscar Cardoza from Benfica, Trabzonspor have failed to begin the season with any momentum, at least in the league - in Europe they have enjoyed wins over Rostov and Metalist Kharkiv. On Saturday, Yusuf Erdoğan gave the Black Sea team the lead after 15 minutes.

Trabzonspor looked to be headed toward their first league win but Ezquiel Scarione popped up to equalize for the away side five minutes from time. Temporarily moving top, Beşiktaş also had a 1-1 draw at home, against Eskişehirspor, who were down to 10 men for the last 10 five minutes of the game. Olcay Şahan gave the home side the lead after 21 minutes but Berkay Dabanlı snatched a point in the second half. Galatasaray put a tough week behind them with a 2-1 win over Sivasspor on Friday. The week has been one of upheaval as chairman Ünal Aysal decided step down while poor form has already called coach Cesare Prandelli's position into question. Even former coach Fatih Terim kept Gala in the headlines by saying that he doesn't want to join Galatasaray's higher committee.

At least on the pitch, things seem to have picked up. The home side dominated much of the game and enjoyed a comfortable lead for most of the game. Aureacutelien Chedjou gave the red and yellows the lead after 19 minutes who converted from a corner. Burak Yılmaz doubled the lead just after the half hour mark, drawing a save with his initial effort before sticking the rebound in. Gala enjoyed their two-goal cushion but they were subjected to a slightly uncomfortable finish once Macauley Christantus scored with 20 minutes left to go, the Nigerian's first goal of the season. The home side held on however to move to seven points in the league, and ease the pressure on the under-fire Prandelli, as well as produce a productive distraction.