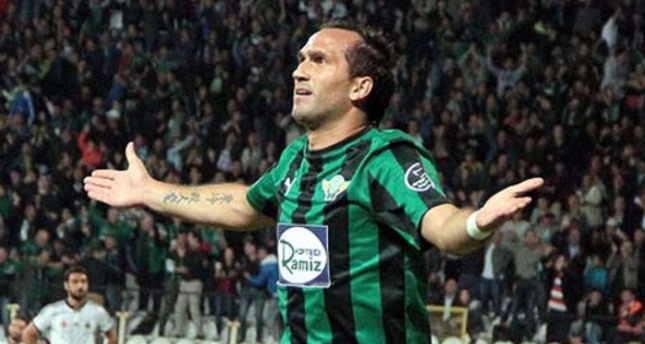 by Daily Sabah Sep 30, 2014 12:00 am
After four weeks of the new Spor Toto Super Liga season, minnows Akhisar Belediyespor are still holding on to the top spot after the Anatolian team defeated powerhouse Fenerbahçe 2-0 on Sunday. Not only did they overturn the defending champions and one of the bigger sides in Europe, they did it with a squad worth only TL 34 million ( $14 million, 12 million euros). Akhisar Belediyespor Chairman Hüseyin Eryüksel said, "Our annual cost is around TL 35 million. Our first goal was to set up a team could consistently stay in the top division. For that purpose, we need five more years." The team that finished 10th in the league last season are beginning to raise a few eyebrows. Akhisar Belediyespor's Greek forward Teofanis Gekas has already attracted a great deal of attention in Turkey, having netted six goals in four games, more goals than 15 top division teams have mustered. The number of goals scored by Gekas even outweighs those scored by Turkey's biggest three clubs, Fenerbahçe, Galatasaray, Beşiktaş. While Fenerbahçe have put an estimated price tag of 50 million euros on the head of their Nigerian forward Emmanuel Emenike, Gekas signed for Akhisar Belediyespor for free. "Our star player has not let us down. We played well as a team also," said chairman Hüseyin Eryüksel. With two goals against Fenerbahçe, Gekas kept his team in the top spot. He promised to score two goals before the match and so kept his promise. Gekas has played 54 matches in the Super Liga and has scored 39 goals in total. The Greek star scored a hat-trick against Fenerbahçe in the 2011-2012 season when he played for Samsunspor. Following their first league defeat of the season, Fenerbahçe's coach İsmail Kartal said, "We prepared for the match well and analyzed our rival meticulously. However, they managed to use the opportunities better than we did. We made a lot of faulty passes. Our rivals played well." Akhisar Belediyespor's coach Mustafa Reşit Akçay said, "We aimed to stop them from doing what they wanted to do. And after that, we used our guns in the forward line. It is very important to defeat a powerhouse like Fenerbahçe. Gekas sang well and we won the game with his beautiful song."