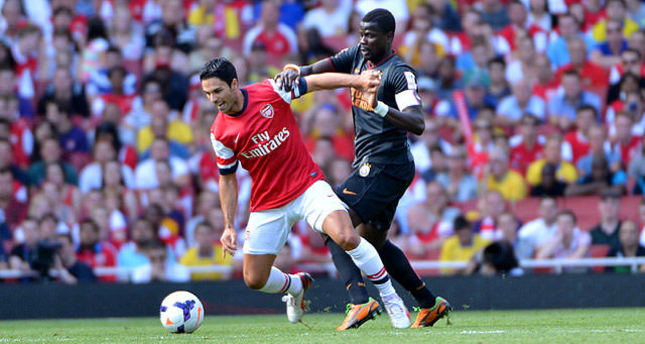 by Kenny Laurie Oct 01, 2014 12:00 am
Galatasaray will be looking to take advantage of Arsenal's midfield injury crisis today as they look to pick up their first ever win on English soil.The Istanbul side travel to London to take on Arsenal - who qualified for the Champions League group phase after beating Gala's rivals Beşiktaş - having never won in England in nine attempts, although they have defeated Arsenal before in the UEFA Cup final in 2000. Sadly for the Yellow and Reds, the form guide suggests that they may stretch their unfortunate streak in England to 10 games after winning just five of their last 17 away games in the Turkish Super League.

What is in their favor is Arsenal's seemingly perpetual injury crisis. While Jack Wilshere may be passed as fit for the encounter, the English side will be without Aaron Ramsey - who has been Arsenal's talisman over the last 18 months - and Mikel Arteta, both of whom are out for around a month.

Arsenal are also without long-term absentees Olivier Giroud, Theo Walcott and Mathieu Debuchy. Arsenal and Galatasaray are both desperately seeking points after a disappointing opening round that saw the English club lose to Borussia Dortmund while Gala drew at home to Anderlecht. The 2014/15 season has been an unhappy one so far for Galatasaray. A loss in the Super Cup and a slow start to the league season has brought a sense of doom and gloom to the club. New coach Cesare Prandelli is already rumored to be on the chopping block while Chairman Ünal Aysal has already decided to step down ahead of an early election in mid-October. The one ray of sunshine was last weekend's 2-1 win over Sivasspor where Galatasaray looked more like the side Prandelli has in mind. Wesley Sneijder - who has too often disappointed - looked more assertive in a deeper playmaking role while the team played the possession football that their coach has preached since day one. A win is all the more imperative for Gala after a disappointing opening round 1-1 draw with Anderlecht.

While Arsenal are a familiar side to other Turkish teams, having played Fenerbahçe and Beşiktaş in the last two campaigns, Galatasaray have only played Arsene Wenger's side once. But it happened to the club's biggest and most venerated game.

The two sides met in the UEFA Cup final back in 2000 when the likes of Gheorghe Hagi, Ümit Davala and Hakan Şükür led Cimbom to glory on penalties to win Turkey's only ever European trophy, defeating Thierry Henry and co 4-1 on penalties after a goalless 120 minutes.

In London, the Metropolitan Police Force has put itself on alert with both Galatasaray and Beşiktaş fans in town. Beşiktaş play Tottenham Hotspur in the Europa League tomorrow. English clubs have become weary of Turkish fans after several bad experiences, including a number of stabbings, most notably when two Leeds United fans died in Istanbul over a decade ago.

The police force in London is taking extra precautions to ensure there are no problems between opposing fans.

"We are aware of the background of the two clubs and appropriate plans will be in place. We are also aware that the clubs will have supporters already based in London," a spokesman for British Transport Police.

"We are used to dealing with large numbers of fans and we are liaising with the clubs to make sure everyone is safe and on the move."