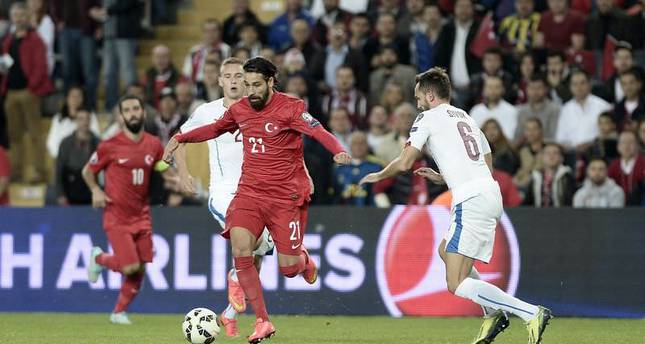 Turkey had taken the lead in the eighth minute of the game, when Galatasaray forward Umut Bulut scored with a header.

Fenerbahce's attacking left-back Caner Erkin whipped the cross from left and Umut put the ball in the back of the net, 1-0.

Seven minutes later, Besiktas centre-back Tomas Sivok scored the equalizer from Ladislav Krejci's corner. Sivok rose and headed towards the goal, the ball past goalkeeper Tolga Zengin and went in, 1-1.

In the 29th minute, Turkish winger Gokhan Tore's shot from inside the box which shaved the woodwork. Six minutes later, Atletico Madrid's Turkish star Arda Turan's shot went over the crossbar. Turkey then increased the pressure.

Despite Turkey's efforts to take the lead, the two sides headed to the locker room even at the half.

In the 58th minute, the Czech Republic team scored the leading goal, when Borek Dockal assisted by Pavel Kaderabek finished in the penalty area, 2-1.

In the remaining time, Turkey tried to push hard to score an equalizer. However, the Czech Republic team got a precious win in Istanbul under the guidance of their veteran captain Tomas Rosicky and Turkey lost their second Group A match.

In other group matches, Netherlands toppled Kazakhstan 3-1 and Iceland defeated Latvia 3-0 in an away match.

Results of the night are as follows: