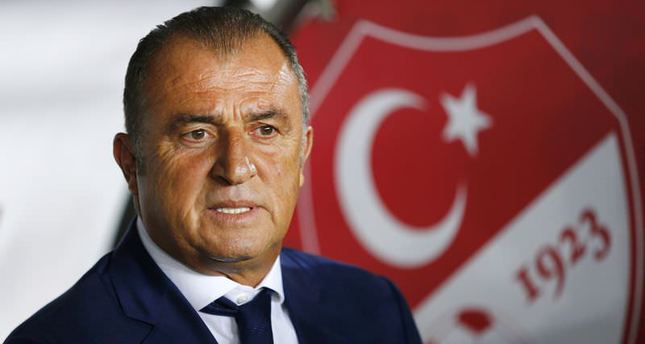 by Daily Sabah Oct 13, 2014 12:00 am
The Turkish national football team will play a critical match against Latvia after Friday's shock defeat to the Czechs. Sources close to Turkey coach Fatih Terim claim that he will resign if Turkey lose today's match against Latvia. Turkey have so far suffered two tough defeats in their opening two games of the Euro 2016 qualifiers, losing 3-0 away to Iceland and 2-1 at home to the Czech Republic on Friday. With qualification already on a knife edge, it is believed the man at the helm will step down if the team are unable to pick themselves up today against lowly Latvia.

"We will play the next match with these footballers and we have to motivate them," said Turkey coach Mert Günok Terim. But according to the Turkish media, Terim lost his temper at the team on the plane, slamming the squad and accusing them of being unable to carry out his orders. According to Turkish media, he is alleged to have said to Turkish footballers after the defeat on Friday to the Czech Republic, "You gave away two funny and stupid goals. Everybody must defend his area of the field like a man. Nobody looks at the ball. There is only one defender in the squad. But what the hell is he looking for in the forward line. Tomas Sivok scores a goal. We told Umut Bulut to defend from the front. But Umut only watches them score. He turned our right wing into an aisle. Olcay Şahan did not follow one man. Our players trust themselves so much that they make stupid mistakes."

Terim is expected to overhaul the squad for the game against Latvia. He plans to replace goalkeeper Tolga Zengin with Volkan Babacan and there will also be a change-up in defense where Terim is looking to assign Mehmet Topla to the front of the defense and sideline Selçuk İnan. Terim is believed to be hesitant in playing Caner Erkin after the coach got upset that Caner missed a number of opportunities. It also seems evident that Terim has not given up on Beşiktaş's duo Gökhan Töre and Oğuzhan Yakup. Latvia are currently in fifth place in Group A, one spot above Turkey who are the only team yet to have won a point. One ray of hope for Turkey is that Latvia's most effective player, Artjoms Rudnevs, who plays for Hamburg, is injured In the past, Turkey has won only one of their four matches against Latvia, drawing in two matches and losing one.