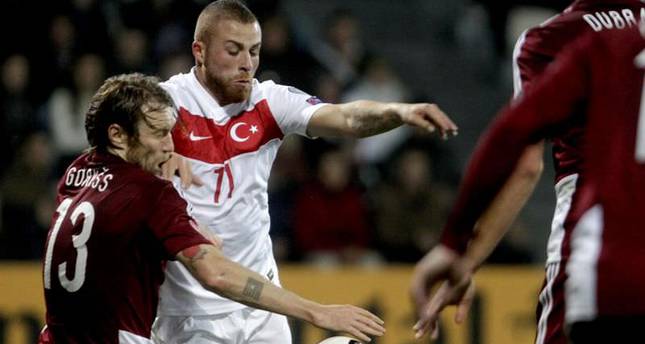 Turkish forward Umut Bulut missed a great chance in a one-on-one position in the penalty box in the ninth minute - the ball hit the bar and went out.

Eleven minutes later he missed another chance in the area, when 39-year-old Latvian goalkeeper Aleksandrs Kolinko saved his shot.

In the 41st minute, Atletico Madrid's Turkish star, Arda Turan, shot from outside the box but shaved the woodwork.

Both teams headed to their dressing rooms even at half-time.

In the early minutes of the second half, Turkish midfielder Bilal Kisa scored from long range, 1-0, breaking the deadlock.

In the 64th minute of the match, Turkish forward Adem Buyuk's attempt on goal was denied by Kolinko.

In stoppage time, Latvian full back Gints Freimanis received his second yellow card and was sent off.

Dictating the tempo of the game generally, Turkey tried everything to score the winning goal; however their efforts were not enough to snap up a win.

Meanwhile, in other matches of the group Czech Republic beat Kazakhstan 4-2 in an away match.

Iceland defeated their powerful opponents, the Netherlands, 2-0 in Reykjavik.

The results of the night are as follows: