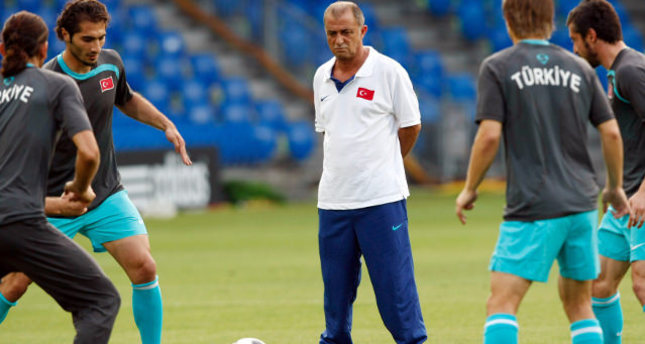 After defeats to the Czech Republic and Iceland, Turkey drew against rivals Latvia and are now rooted to the bottom in Euro 2016 Group A

Alarm bells are ringing for Turkish football. Turkey have won only one point in their first three matches of the qualifying rounds for Euro 2016. Turkey drew 1-1 against Latvia in the UEFA Euro 2016 Group A qualifier match played at Skonto Stadium, Riga on Monday. After losses to the Czech Republic and Iceland, Turkey remains anchored to the bottom of the group with Kazakhstan, while Latvia is fourth with two points. This downturn in results has caused widespread disappointment and anger among Turkish football fans.

After the arrival of Fatih Terim and his squad at Istanbul Atatürk Airport, a group of angry fans shouted and protested against the poor results and meek performances. One fan said to Fatih Terim, "How do you expect us to support this team? Please tell us Mr. Terim. We are here as a Turkish national team's fan. Why do you turn your back against us? Are we supposed to come here with thousands of men?" Turkish media also criticized Fatih Terim and the footballers. Mehmet Demirkol, a Turkish columnist addressed Fatih Terim saying, "You could find only one defender, how can you deserve a 4 million euro per year contract?" Fatih Terim had previously said that "I played Mehmet Topal as a defender because I had no any other alternative."

Famous Turkish football commentator Rıdvan Dilmen also criticized Fatih Terim's selection choices. He said, "If Latvia played in the Turkish Super League, they would be relegated. They are the weakest team and we could not even beat them. Fatih Terim's choices are problematic. If the second goalkeeper is Tolga Zengin, he must remain that way. If not, he must play Tolga Zengin as the prime goalkeeper. But he continually changes his goalkeeper options."

Against Latvia, Turkish forward Umut Bulut missed a great chance in a one-on-one position in the penalty box in the ninth minute, with the ball striking the bar. Eleven minutes later he missed another chance in the area, when 39-year-old Latvian goalkeeper Aleksandrs Kolinko saved his shot. In the 41st minute, Atletico Madrid star Arda Turan shot from outside the box but his effort shaved the woodwork. Both teams headed into the dressing room even at half-time.

In the early minutes of the second half, Turkish midfielder Bilal Kisa scored from long range, breaking the deadlock. In the 53rd minute, Turkish defensive midfielder Ozan Tufan was penalized for tripping Aleksejs Visnakovs in the penalty box with the referee awarding a penalty to the home side. Valerijs Sabala equalized from the spot to make it 1-1. In the 64th minute of the match, Turkish forward Adem Büyük's attempt on goal was denied by Kolinko.

Turan's close-range header missed the target in the 85th minute. Three minutes later, Caner Erkin's free kick missed the goal. In stoppage time, Latvian full back Gints Freimanis received a second yellow card and was sent off. Dictating the tempo of the game generally, Turkey tried everything to score the winning goal; however their efforts were not enough to grab all the points. Elsewhere in Group A, the Czech Republic beat Kazakhstan 4-2 in an away match. Iceland defeated their powerful opponents, the Netherlands, 2-0 in Reykjavik. Swansea midfielder Gylfi Sigurdsson scored both goals Monday as Iceland pulled off a shock 2-0 defeat of the Netherlands in a European Championship qualifier to hand new coach Guus Hiddink his third loss in four matches since taking over after the World Cup. It was Iceland's first ever victory over the Netherlands in 11 meetings. The win kept Iceland perfect in three qualifiers and left it level atop Group A with the Czech Republic, which got its third straight win by beating Kazakhstan 4-2 in Almaty. Turkey remain anchored to the bottom of the group with Kazakhstan after gaining its first point with a 1-1 draw at Latvia. Since the World Cup in Brazil, the Dutch have lost a friendly to Italy, lost to the Czech Republic, struggled to victory over Kazakhstan and lost to Iceland, a dismal record that will put pressure on Hiddink, who is in his second stint in charge after previously leading the Netherlands to the World Cup semi-finals in 1998. Van Persie said it was not fair to blame Hiddink. "Guus is a fantastic coach," he said. "We are all working as hard as we can to play well."