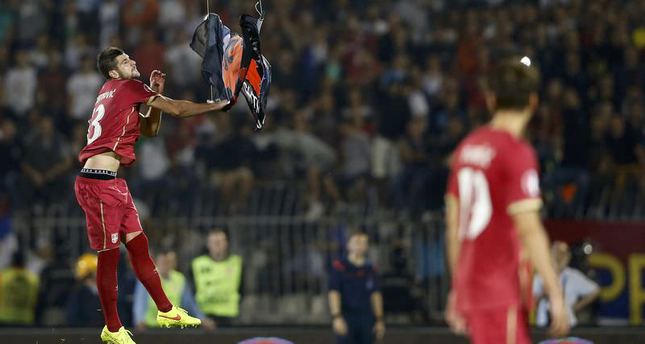 by Anadolu Agency Oct 15, 2014 12:00 am
Balkan politics put an early end to the The Euro 2016 qualifier match between Serbia and Albania in Belgrade Tuesday after a provocation sparked a scuffle between players and a riot in the stands.

The match was interrupted in the 42nd minute by English referee Martin Atkinson when a drone appeared above the pitch, dangling an Albanian flag. Serbia's Stefan Mitrovic grabbed the flag, but was assaulted by Albanian players.

Serbian fans in turn stormed the fence and were turned back by police firing tear gas, while the referees ordered the teams to retreat to their dressing rooms.

The match was subsequently abandoned, with UEFA saying in a statement that the incidents would be reported to its disciplinary body.

Olsi Rama, brother of Albanian Prime Minister Edi Rama, was arrested on suspicion of organising the incident that provoked the abandonment of the qualifier, according to Serbian State Television (RTS).

The two nations have been foes for centuries. Most recently, they fought in Kosovo, while it was still Serbia's province with a majority Albanian population.