What can Fatih Terim do in the short-term 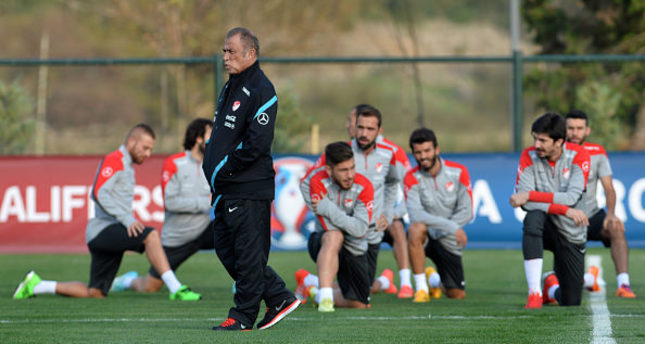 by Arda Alan Işık Oct 15, 2014 12:00 am
Fotomaç columnist Gürcan Bilgiç said after Turkey's home lost against Czech Republic on Friday night, "Fatih Terim has been managing the national team for a year, but still we do not know what he has planned to improve Turkish football.

"If we do not put thinking before dribbling in our football perception, we cannot cope with our problems. I suppose we understand that there is no difference between players who are called stars and others." Without circumlocution, Bilgiç asks a fair question: " What have you planned Fatih Terim?." Apparently, Turkey's only plan was putting Umut Bulut (aka the Tasmanian Devil) in the penalty box in order to create chaos. However, after the 3-0 loss against Iceland, this tactic was not the "great plan" that Turkish people expected from the "Imperator."

Even if Fatih Terim believes that his team were good going forward in both the Czech Republic and Latvia matches, there was no system in Turkey's game. Do not be deceived by the pressure in the first 15 minutes, it was the result of the "gas" that Terim gave the players in the locker room. Thus, Turkey could not keep up the pressure for both halves. Terim tried to push his players' physical limits to get rid of his team's organizational deficiencies, just as he did in the 2008 European Championship, but none of his players were in top physical conditions nor were opponents were unable to prevent his simple plan.

Seeing as, Caner Erkin has a fantastic left foot which lends itself a number of tactical philosophies but the problem is Terim builds his whole strategy on it. The national team has a lot of players whom Terim can build a strategy with, such as Arda Turan, Oğuzhan Özyakup and Ozan Tufan. Nevertheless, Terim is not taking the responsibility for creating a sophisticated plan with these players to get decent results. He overlooks the beginning steps of offensive organization, such as putting Caner out on the left wing. But the game plan usually starts from the goalkeeper and the team has to find a sustainable way to carry the ball into the opponent's half. Even though Turkey found space to attack in the Latvia game, their inability to move the ball from one half to the other was the reason why the team struggled to create opportunities.

However, according to his statements after the Czech Republic match, Fatih Terim seems to see no problems with Turkey's game:

"We feel extremely sad about the score. We did everything to win, we had at least five goal-scoring opportunities in the first half, but the opponent came just once and scored. We were so ambitious but we need to be better at executing, we handed this defeated to them on a silver platter. Add to that, we concede goals in such critical moments that we cannot psychologically overcome the situation. But I believe results will come one way or another if we play like this."

As you can see, Terim believes there is nothing wrong with his strategy and that one point in three games is just an unfortunate coincidence. Just as what I wrote about İsmail Kartal and Slaven Bilic's game last week, Terim is also lacking a logical connection between his expectations (scoring goals) and ways to achieve them (strategy, tactics et cetera). Terim wants to score, but he does not acknowledge that scoring goals and, most importantly, doing it consistently is a complex process. One cannot expect to score in every game by organizing a tactic between just Caner and Bulut. For example, there is no certain plan in Turkish players' mind when the ball goes out to the right wing or the left wing. Thus, every Turkish player looks lonely and helpless when they receive the ball, because they simply do not know what their coach expects from them.

These points briefly explain in which areas the Turkish national team is having troubles. But what about solutions? Although, Terim has to adjust himself to the new way of playing football in the long term, he can do simple but effective tricks in the short term. Personally, I would rather implement radical means to improve Turkish football, but I cannot deny that some tricks can be useful at the same time.

Firstly, rather than wasting Ozan Tufan with defensive duties, Terim can build a dynamic game around him. His energy and passing skills are sufficient to make him the center of Turkey's game plan and he could be Terim's new Selçuk İnan. He does not have the fundamental deficiencies that most of his elder teammates have, he can pass the ball to his teammates properly and has smooth ball control. Thus, even just letting Tufan control the flow of the game would create a huge difference in ball domination.

After that, instead of crossing every ball directly into the penalty box, players must be patient and selective when it comes to creating an opportunity. In order to maintain that, Terim needs to stress the importance of circulating the ball among all players and especially between Turkan, Tufan and Özyakup. After Tufan starts the play, Terim can use Özyakup and Turan's creativity to penetrate the opponent's defense.

Given that it is always easier to deal with wide and open defenses, Terim should use his wing players to create open spaces for others to penetration. Positioning Olcay Şahan and Gökhan Töre near the corner spots would not only widen the opponent's defense but also create more threatening openings. Thus, it would be harder for the opponent to protect its defensive line. In contrast, Turkey is making their opponent's job easier by congesting their forward players in the same spot.

Of course, these suggestions only offer short-term solutions. The real work for Fatih Terim actually starts after these tactics are implemented. He needs to build a compact team that don't necessarily have classical positions.

It is well known, especially by Fenerbahçe fans, Volkan Babacan was a real headache at the beginning of his career. He had a lot of mental problems that inhibited him from performing at his best. However, today, he gives the impression of a confident goalkeeper. He was very positive at the start of the game in the Latvia match and made a few mistakes. On the other hand, Tolga Zengin "perfectly" displayed how a goalkeeper can make a chain of mistakes after being demoralized by just one. For the Czech Republic's second goal, firstly, he kicked the ball to the opponent, instead of just passing it to his nearest team-mate. Then, he lost his focus because of his mistake and could not follow the game properly. Young goalkeepers should take lessons from this experience, that a goalkeeper can never lose his or her concentration.