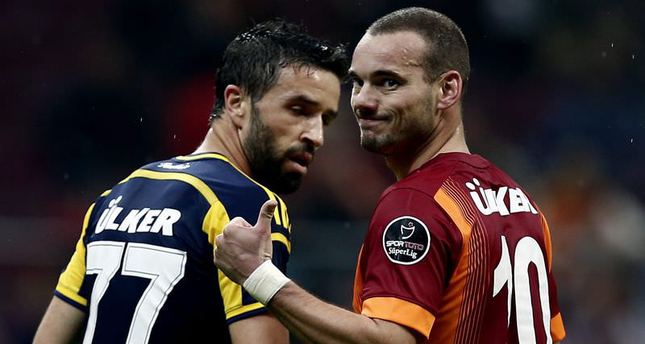 All eyes in Turkey were glued to the "Intercontinental Derby" match between the two Turkish teams that began at 19:00 local time, or 1700 GMT.

The Derby started with a quick tempo. In the 17th minute of the game, the long range drive of Fenerbahce's Portuguese central midfielder Raul Meireles was denied by Fernando Muslera.

Fenerbahce veteran Emre Belozoglu, who suffered an injury, was subbed-out in the 34th minute. He was replaced by another Fenerbahce old-timer Selcuk Sahin.

In the 42nd minute, Fenerbahce's Nigerian forward Emmanuel Emenike received a through ball from Meireles, but missed a one-on-one chance.

The match was even between the two sides when they headed to their dressing rooms at half-time.

In the very early minutes of the second half, Galatasaray missed a chance with Dutch attacking midfielder Wesley Sneijder. His shot was saved by Fenerbahce goalkeeper Volkan Demirel.

Fenerbahce's Portuguese centre-back Bruno Alves was directly sent off by the referee after kicking the back of Galatasaray midfielder Blerim Dzemaili in the 53rd minute. The Fenerbahce team was left with ten men.

Four minutes later, Galatasaray winger Olcan Adin's shot rattled the crossbar. Volkan Demirel could not even move. The "Lions" were increasing the pressure to score the leading goal.

Nine minutes later, Sneijder's shot from outside the box shaved the woodwork. Meanwhile, Fenerbahce goalkeeper Volkan Demirel suffered an injury to his waist, when he tried to save the shot, but still he continued to play.

Galatasaray forward Umut Bulut missed a chance in the 85th minute. He headed the ball in the box, however, it went out.

The home team Galatasaray finally broke the deadlock when their Dutch star Sneijder made a classy long shot in the 88th minute, bringing the score to 1-0.

In the 90th minute, Sneijder found the net once again. He lobbed the ball outside the box and beat Volkan Demirel, again and again, bringing the total to 2-0.

In the last minute of the game, Fenerbahce's Midfielder Alper Potuk scored a "controversial" consolation goal, bringing the final score to 2-1 before the referee blew the final whistle.

Before the Derby, a former Galatasaray player, retired Australian winger Harry Kewell was presented with a plaque and an autographed Galatasaray home jersey.

The "Intercontinental Derby" is the name given to any football match between the two Turkish teams from the Eastern and European parts of Istanbul. The "Lions" represent the Galatasaray team.