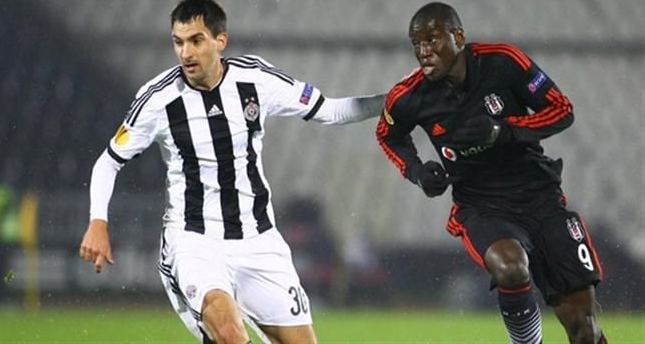 by Daily Sabah Oct 25, 2014 12:00 am
Turkish giants Beşiktaş and Trabzonspor both grabbed crucial wins in the UEFA Europa League on Thursday night. While Beşiktaş heavily defeated Serbian team Partizan Belgrade 4-0 at the Partizan Stadium in Group C, Trabzonspor beat Poland's KSC Lokeren OV away from home. The wins weren't just good for the clubs, but good for Turkish football. After the victories, Turkey regained its position in the UEFA coutry ranking, staying ahead of Greece. After Turkish giants Galatasaray were defeated by Dortmund 4-0 and Olympiakos defeated Juventus 1-0, Turkey have fallen behind Greece with the former ranked 13th and the latter 12th. However with Beşiktaş and Trabzonspor's wins and draws for Greece's three teams, Turkey rose to 12th and Greece back to 13th.

Why is ranking so important? UEFA rankings determine which clubs will have direct entry to European tournaments, with the higher ranking teams gaining more direct European spots. If Turkey falls to 13th, next year Turkish clubs won't be awarded direct spots into the European competitions and will have to play elimination matches.

As for the matches, Beşiktaş eased past Serbian team Partizan 4-0. In the 13th minute Beşiktaş winger Gökhan Töre launched a beautiful curling effort but Partizan goalkeeper Milan Lukac deflected the ball out for a corner. Five minutes later Beşiktaş's Austrian midfielder Veli Kavlak's long range drive made it 1-0 to the visitors. In the 28th minute, Töre nearly doubled the advantage but his shot hit the bar.

Four minutes later Besiktas goalkeeper Tolga Zengin was called into action, saving an effort from Partizan's Petar Skuletic, Partizan's best chance of the first half. Beşiktaş doubled their lead when Senegalese forward Demba Ba, assisted by Olcan Şahan, put the ball in the back of the net on the stroke of hlf time. In the 52nd minute, Beşiktaş made it three when Turkish midfielder Oğuzhan Özyakup found the back of the net from Töre's decisive pass from the byline. Two minutes later, Töre had one of his own, scoring the Istanbul side's fourth goal of the night. In the group's other game, English side Tottenham Hotspur crushed Greek sie Asteras Tripolis 5-1 in London.

English forward Harry Kane's hat-trick and Argentine midfielder Erik Lamela's brace brought deliver the points for Spurs. Trabzonspor AŞ bounced back from defeat on matchday two with a 2-0 victory over KSC Lokeren OV. Polish champions Legia Warszawa inflicted the Turkish side's first ever UEFA group stage home loss last time out in the UEFA Europa League Group L but second-half goals from Mustapha Yatabare and Kevin Constant ensured lightning did not strike twice. Lokeren, who had lost both their previous away games in Europe this term by the odd goal, dominated the early exchanges. Giorgos Galitsios had the first sight of goal with two minutes on the clock, forcing goalkeeper Fatih Öztürk to tip over a fierce effort from distance.

Three minutes later, Koen Persoons saw his left-footed attempt whistle past the post. Fatih was called into action once more after Besart Abdurahimi cut in from the left and beat his man but his finish lacked power. The No18 might also have done better not long after when he blazed over with the keeper out of position after the hosts failed to clear inside their box. Gradually the tide of the first half turned and Vahid Halilhodzic's side threatened through Jose Bosingwa's free-kick before eventually recording their first shot on target in the 34th minute. Constant's powerful left-footed strike was brilliantly tipped over by Boubacar Barry. Constant's short corner created the first opening of the second period but Oscar Cardozo lacked accuracy. Four minutes later Yatabare made the breakthrough after Majeed Waris's goal-bound effort was deflected agonizingly wide. Substitute Junior Dutra went close for the Belgian team but it was the hosts - and Constant - who would grab the crucial second.