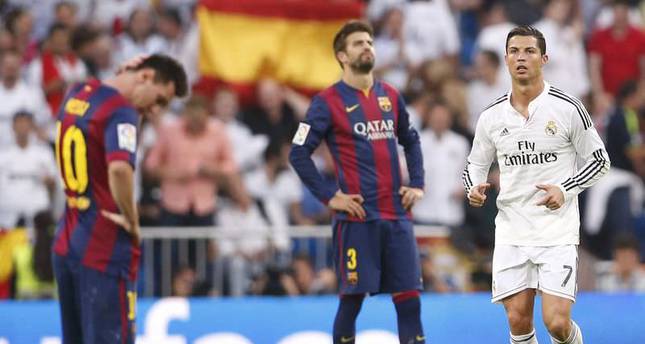 Real Madrid took the spoils in the first El Clasico of the season as Luis Suarez’s Barcelona debut ended in a 3-1 defeat. A ninth consecutive win in all competitions takes Madrid to within a point of Barca at the top of La Liga

Real Madrid's decision to sell midfielders Xabi Alonso and Angel Di Maria left many scratching their heads and consecutive La Liga defeats as well as a reverse to Atletico Madrid in the Spanish Super Cup set alarm bells ringing at the Bernabeu. Toni Kroos, who joined from Bayern Munich while Alonso went the other way, was seen as a poor substitute for the experienced Spain midfielder, while James Rodriguez, top scorer at the World Cup finals in Brazil with six goals, seemed to lack Di Maria's intensity and eye for a killer pass. A couple of months later and the picture is an altogether different one. Real have come into the kind of form that propelled them to a record-extending 10th European title last season in coach Carlo Ancelotti's first term in charge. Recent performances, including Saturday's 3-1 win at home to Barcelona in the La Liga 'Clasico', suggest Ancelotti has successfully completed the integration of Kroos and Rodriguez into a side that is fearsome in attack and mean in defence. Since they were beaten at home by Atletico in La Liga on Sept. 13, Real have scored 38 goals in nine outings in all competitions and conceded a mere six. Portuguese World Player of the Year Cristiano Ronaldo is in the form of his life and has netted a jaw-dropping 16 goals in eight La Liga appearances, including the equaliser from the penalty spot on Saturday.

The victory lifted Real to within a point of leaders Barca after nine matches and they are virtually assured of passage to the Champions League knockout round after winning their opening three group games. "We're in very good form, I don't know if I've found the perfect formula," Ancelotti told a post-'Clasico' news conference. "We're also in good mental shape," added the Italian. "We still have the same idea as last year. We're trying to improve our play and everything is coming off well."

Barca, by contrast, are licking their wounds after their defensive frailty was again exposed on Saturday and they squandered a number of chances after Neymar had put them ahead in the fourth minute. Pepe was left unmarked to head in from a corner for Real's second goal, while their third came after a mix-up between Andres Iniesta and Javier Mascherano. Ronaldo's penalty was the first goal Barca had conceded in La Liga this season but, worryingly for new coach Luis Enrique, they have failed in both their biggest tests so far this term, also losing 3-2 at Paris St Germain in the Champions League. "The game clearly showed that there are opponents who are just as good as us, if not better, like today," Luis Enrique told a news conference. "(In Paris) we deserved more and the team was good in general terms," added the former Spain midfielder, who had stints at both Real and Barca. "It was a different story against Madrid as they deserved more. But we'll pick ourselves up and at the end of the season we'll see if we have deserved something."