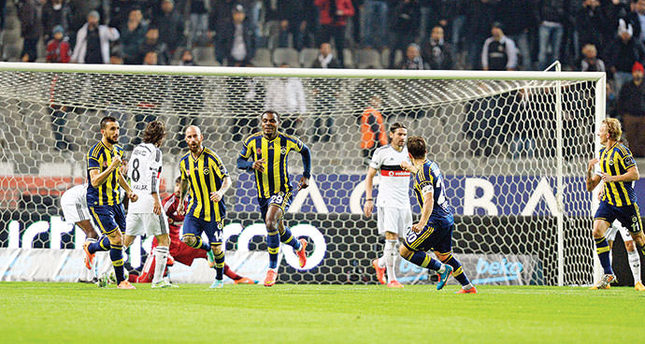 by Arda Alan Işık
Nov 04, 2014 12:00 am
After Fenerbahçe beat Beşiktaş on Sunday night, there was a consensus among the Turkish football media that Beşiktaş's right back Necip Uysal's performance was a total disaster and Slaven Bilic should have left him on the bench. Akşam columnist Ali Ece described him as the "virus" in a perfectly functional machine. Of course, Necip's insufficient performance in two consecutive games has helped perpetuate the argument, but what is strange to see is how most football columnists have managed to miss the awful performances of the entire team and Slaven Bilic, choosing to just blame Uysal, as if he were the only person that underperforming at Beşiktaş.

Even if Beşiktaş have managed to climb to the top of the league and Europa League at various points this season, their performances have been nowhere near convincing enough. Despite the exaggerated comments about Beşiktaş's game, no one has argued about the condition of Partizan, Sivasspor or Tottenham, all teams they have either beaten or dominated. Beşiktaş might have won previous games, but they were never convincing. The only trick that Bilic has pulled off since the beginning of the season has been creating a fast game that creates chaos, and neither Partizan nor Sivasspor were able to beat the tactic. The point here is the insufficiency of Beşiktaş's opponents in the past, not Beşiktaş's sufficiency. Yes, it's always fine to win despite not being playing well, but it is clear that there are much better teams that Beşiktaş would struggle to beat.

There is no logic in blaming all the obvious problems on Uysal and letting Beşiktaş get away with a poor game plan. How can we explain Beşiktaş's frantic situation in the first half and their inability to play football? Yes, their tactics broke down, but Beşiktaş could not even make several passes in a row for 45 minutes. Fenerbahçe were much more organized and patient, therefore they could easily make use of Beşiktaş's simple mistakes. Beşiktaş has to change its tactics during derbies. Bilic once said "My players were even celebrating throw ins and corners when we were ahead in the derbies last season." This attitude in the club's community hasn't changed. Psychologically, Beşiktaş start every derby a goal behind. This shouldn't be a topic for discussion for professionals who make millions of dollars per year. But, unfortunately, most of Beşiktaş players turn into the world's most emotional people in the world when it comes to derbies.

Fenerbahçe showed the Turkish league that it is very simple to solve Beşiktaş's chaotic game plan. Actually, Fenerbahçe just kept calm until they found a promising chance, which they found in the third minute, to spark panic in the Beşiktaş ranks. On the other hand, Beşiktaş tried to get the ball into their opponent's half in a hurry and frequently lost possession as a result. Bilic is trying to solve his team's systematic deficiencies by speeding things up, but it's useless if you are being sped up in the wrong way. Bilic has used Gökhan Töre to create chaos in past games, but with Töre suspended, Beşiktaş were not able to create chaos in the Fenerbahçe penalty area.

Why is Beşiktaş bound to a nondescript, chaotic game, which left Oğuzhan Özyakup, Atiba Hutchinson and Demba Ba functionless? Directly passing every ball to Töre before letting him penetrate thoughtlessly is usually enough against poor teams, but Bilic needs to organize better pass circulation between Özyakup, Hutchinson and Ba. These are the central players in their positions and organization among them would not only stabilize Beşiktaş's game but also make Olcay Şahan and Töre much more effective. In their present condition, it is so easy for the opponents to prevent Şahan and Töre from penetrating because Beşiktaş has no second option to threaten its opponents with.

I do not actually understand why Tolga Zengin continues to start every game; he gets injured every game. In almost every game we see Tolga begging for doctors to come onto the pitch. So, why does Bilic not give a chance to Cenk Gönen? The worst goalkeeper is always better than a injured goalkeeper. At the other end of the pitch, Volkan Demirel did a great job in the derby. You do not usually see goalkeepers following crosses up to the end of the penalty box. However, Volkan dominated his penalty area against Beşiktaş and forced Beşiktaş's wing players to make high and imbalanced crosses. His reactions and passing skills were also good.