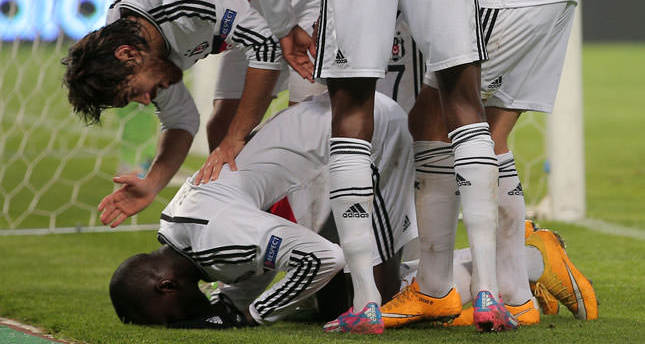 The Istanbul club put their weekend defeat to Fenerbahçe behind them as Demba Ba netted twice to end Partizan Belgrade's Europa League campaign. The win leaves the Black Eagles neck and neck with Tottenham Hotspur - who will travel to Istanbul on Nov. 27 - at the top of Group C. Recently added to the starting lineup, Cenk Gönen had a relatively simple game and was only beaten by a deflected shot. After moving up to the first team, Gönen hopes to stay in the starting lineup and wants Thursday night's win to propel the club to a positive run of form. "In football, sometimes you have to be on the bench, but when the coach puts me in, I want to contribute in the best way possible," said Gönen. "Things are going well in the group. We are in leading position alongside Tottenham. Hopefully we will guarantee qualification in the next game. This game was a good opportunity for us to stop our temporary slump [in the domestic league] and we made full use of that opportunity. We want to win again on the weekend and start a new winning streak. "I feel I contributed to the victory. It was a good night for all of us. For Partizan's goal, the ball was coming to me, but it hit Pedro Franco's right foot and took a different direction, so I could not save it. I've not had the chance to play very often in the last two seasons so, when I do, I want to make the most of it." Gökhen Töre was the architect behind Beşiktaş's win, setting up both of Ba's goals, winning a penalty and passing square for the Senegalese to tap in the second. Beşiktaş goal's came in a five-minute flurry early on the in the second half before Sasa Markovic grabbed a consolation goal for Partizan with 12 minutes left. Elsewhere, Trabzonspor remain in second place in Group L after they grabbed a 1-1 draw away at Lokeren. Majeed Waris equalized from close range two minutes into first-half stoppage time after Ayanda Patosi had given the hosts the lead after five minutes.

Meanwhile, Turkey's only joy was not both teams' good results. What's more important is that Turkey has kept its 12nd position in UEFA country ranking against Greece which ranked 13rd. Why is ranking 12nd so important? UEFA ranking will determine which clubs will have direct entry to European tournaments. If Turkey fall to 13rd ranking, next year Turkish clubs can't be awarded direct spots in the tournaments and will have to play elimination matches.

Elsewhere, after a taxing week for some of their Premier League rivals in the Champions League, Spurs survived a poor second half display to run out 2-1 winners at Greek side Asteras Tripolis. Andros Townsend's penalty and Harry Kane's quick second goal set the north Londoners up nicely, however Asteras pulled one back via a last minute penalty after Federico Fazio's red card. There may have been no repeat of Spurs' 5-1 rout in which Kane got a hat-trick and Erik Lamela produced his 'rabona' goal against the Greeks in London last month. But in the end it was job done to stretch Tottenham's unbeaten run in the competition to four. Spurs are level with Beşiktaş on eight points in Group C and on their way to the knockout stages with two games remaining. "We came to get the three points, the result is good and I am happy," said Spurs manager Mauricio Pochettino.