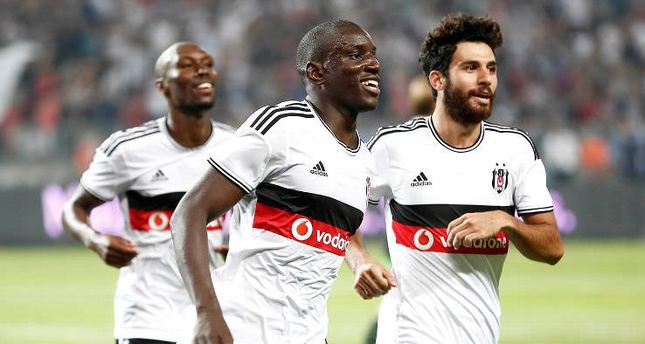 by daily sabah
Nov 11, 2014 12:00 am
Beşİktaş coach Slavan Bilic praised his side, his strike force and even the referee after his team's 2-1 win over Başakşehir on Sunday. The Black Eagles went a goal down in the first half before fighting back to through goals from Demba Ba - who has alerted the attention of English side Liverpool - and Kerim Frei. The win was only sullied by the red cards handed out to Pedro Franco, who was given his marching orders after two bookable offenses with 12 minutes left, and İsmail Köybaşı, who was dismissed in the final minute. Bilic, normally a staunch critic of referees, said after the game that he agreed with referee Cüneyt Çakır and bemoaned his side's poor disciplinary record - with the club having had four players red carded already this season. "I spoke with the fourth official after the game, we had a civilized chat and I have nothing but praise for the referee today," Bilic said.

"We cannot seem to finish games with 11 men but my players gave it their all and managed to keep hold of an important score. "We fought well but we have to be more organized in the midfield. "The red cards shown this week in contrast to the decisions we have been getting recently were fair. "İsmail apologized after the game and Franco had to make that challenge." While discipline was a problem for Beşiktaş, their play had created no such concerns. The Black Eagles' first half performance was hurt by an inability to take their chances but the club clearly marked their domination in the second half. Frei and Ba combined once again, with the pair now accounting for six of Beşiktaş's last seven games. The former scored 15 minutes from time, completing a nice move, after the latter had pulled the Istanbul club level 18 minutes after the break. Ba's goal in particular caught the eye, smashing a goal in off the crossbar from near the corner of the penalty area. Alexander Epureanu had given Başakşehir the lead with just two minutes to go until the break. "I want to talk about the manner in which we played today," Bilic said.

"We played well in the first half but couldn't finish our chances. "However, Kerim Frei's second half performance was incredible and Demba Ba's goal was sensational. "Winning is not always what is most important, we are playing the right football and I congratulate the manner in which the players performed." Ba has now scored 10 goals in 14 games for his new side, alerting the attention of Premier League club Liverpool. According to reports in the Turkish media, Liverpool are looking to the Senegalese to potentially drag the club out of the mire after their poor start to the Premier League campaign. Elsewhere in the Spor Toto Super Lig, Trabzonspor bounced back after losing their coach Vahid Halilhodzic, who left by mutual consent on Saturday, to win 3-2 at home against Konyaspor. Oscar Cardoza twice got on the score sheet in just Trabzonspor's second league win of the season.

Konyaspor opened the scoring away from home through Hasan Kabze just seven minutes into the game before Oscar Cardoza, from the penalty spot, and Yusuf Erdoğan pulled Trabzonspor back, giving them a 2-1 lead going into half time. Just four minutes after the restart, Ömer Ali Şahiner equalized for Konyaspor before Cardoza grabbed his second to give Trabzonspor the points with 13 minutes remaining in the game. In Istanbul, Kasımpaşa picked a 2-2 draw with Gençlerbirliği, with the latter side twice losing the lead, while Erciyespor needed a last-minute goal from Jacques Zoua to snatch a 1-1 draw with Bursaspor. Fenerbahçe continue to sit at the top of the league table alongside Galatasaray, both of whom have 19 points, while Beşiktaş are two points back in second.