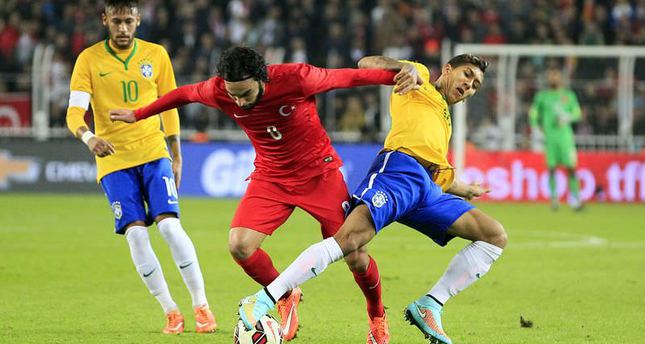 by AA
Nov 13, 2014 12:00 am
South American football giant Brazil eased past Turkey 4-0 in a friendly game at Fenerbahçe Şükrü SaraÇoğlu Stadium in Istanbul on Wednesday night.

In the 19th minute, the flamboyant Brazilian forward Neymar's free kick went over the bar. A minute later he received a pass, and finished in one-on-one position with the outside of his right foot, 1-0. Turkish goalkeeper Volkan Demirel did not even move.

In the 24th minute, Turkish defender Semih Kaya found his own net. Brazilian fullback Danilo crossed the ball into the center but Semih accidentally tapped the ball in his own goal, 2-0.

Through the end of the first half, Neymar darted out on the left side of the Turkey half, dribbled the ball inside the box, and passed it to his teammate Willian, scoring the third goal, 3-0.

In the 54th minute, Brazilian centreback David Luiz smashed a header from a corner kick, but Turkish goalkeeper Volkan Babacan saved it.

Six minutes later Neymar placed a low shot in the net after making a one-two with Willian, 4-0.

In the 72nd minute, Umut Bulut was close to scoring a consolation goal in the Brazil box, however his close-range shot was denied by Diego Alves.

Dictating the tempo of the game most of the time, Brazil won the match 4-0.

The match between the two squads was televised in 102 countries.