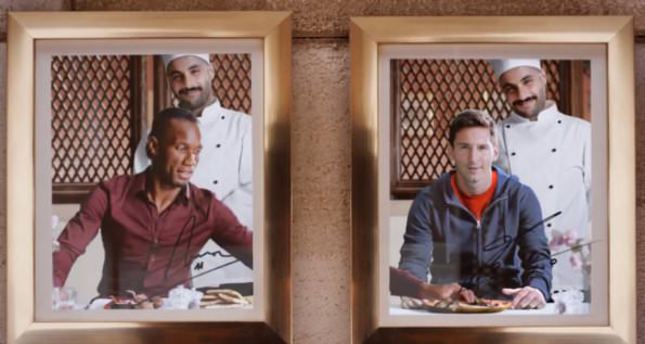 According to the statement released by Turkish Airlines on Friday, the advertisement -- the last in a series of three -- will aim to entice spectators via EpicFoodMap.com.

Turkish Airlines will start a new contest alongside the advertisement, where passengers will upload photos of their favorite world foods and then have a chance to win a trip to the locations shown in the advertisement.

Drogba and Messi will open the contest with their favorite meals on Nov. 18 and aim to inspire passengers to take part and go on voyages to new locations.

Bearing the advertising agency Crispin Porter & Bogusky's signature, the advertisement can be seen in every part of the world where Turkish Airlines flies.

The campaign can be followed on the #widenyourworld and #epicfood hashtags on Twitter.

Meanwhile, Turkish Airlines General Manager Temel Kotil said that they are proud of this strategic partnership and expressed gladness about Drogba's involvement in the Turkish Airlines family.

"Both the United Kingdom and African markets are the markets that we care about. Drogba is not only a football icon in England but is also a philanthropist to whom we pay tribute for his efforts via the Didier Drogba Foundation. That's why we decisively preferred him as the face of Turkish Airlines' brand," he explained.