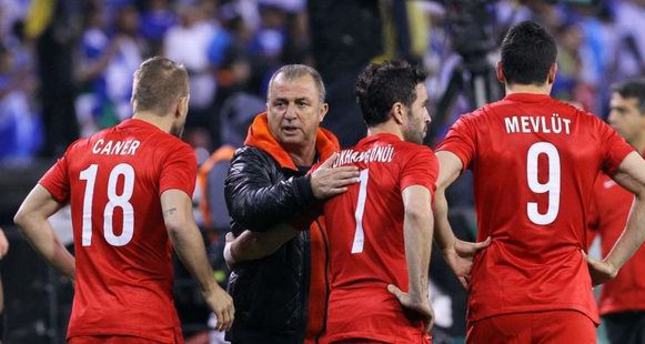 by daily sabah
Nov 15, 2014 12:00 am
Turkey will host Kazakhstan in Istanbul on Sunday in a Group A match at Türk Telekom Arena at 21:45 pm as they not only try to resuscitate their UEFA Euro2016 qualifying campaign but also save themselves from a drop in the UEFA rankings. This match is crucial for Turkey, not only for reaching the UEFA Euro 2016 tournament, but also for their position in the UEFA rankings. If Turkey is not able to win against Kazakhstan, they will be among the fourth seeds for the forthcoming World Cup 2018 draw, making qualification all the harder. The poor performance of Turkey's national team has put them in last position in the third pot so far. If Turkey can not get themselves together, they will have to play much stronger teams to qualify for World Cup 2018. If the 2014 elimination system goes on, the pots for European teams will include nine teams each. As of Oct. 23, Turkey is ranked 28th among UEFA countries. But since Russia will be excluded from the pots because they will be host country for World Cup 2018, Turkey will be ranked 27th. It means Turkey is the last ranked team in the third pot. Even if Turkey beat Kazakhstan, their points will fall to 604 after the Brazilian defeat in Wedenesday's friendly match. Turkey will play three matches between now and July 2015 in the quaifying group, two matches against Kazakhstan and one against the Netherlands, games that will determine which pot Turkey will be able to enter. Meanwhile, Turkish striker Mevlüt Erdinç, who got injured during the friendly match against Brazil, has been removed from the national squad. Turkey lost the match 4-0 on Wednesday. According to a statement made by the Turkish Football Federation, the 27-year-old Saint-Etienne striker sustained a muscle tear in his left thigh and returned to France. Currently at the bottom of Group A, Turkey has only one point and is aiming to get its first win on Sunday. Turkey lost againt Iceland 3-1, Czech Republic 2-1 and drew with Latvia 2-2 in their previous group matches. The season country coefficient rankings are based on the results of each association's clubs in the current UEFA Champions League and UEFA Europa League season. The rankings, combined with those of the four previous campaigns, determine the number of places allocated to each association in the forthcoming UEFA club competitions.