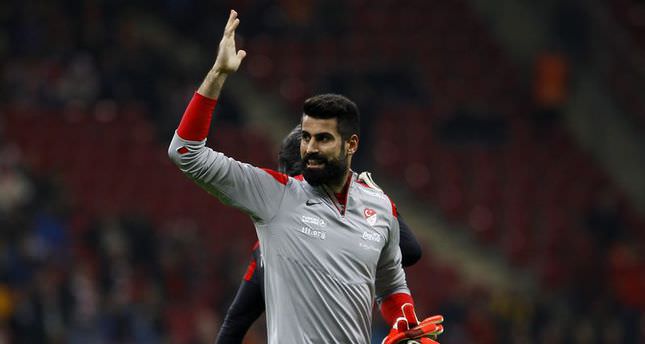 by daily sabah
Nov 18, 2014 12:00 am
Fenerbahce goalkeeper Volkan Demirel drew the ire of Turkey fans on Sunday night when he refused to play in his country's clash with Kazakhstan. Prior to the game, Demirel was subjected to abuse from Turkey fans behind the goal, presumably because the goalkeeper play's for Galatasaray-rivals Fenerbahce - the game was played at Galatasaray's Türk Telecom Arena.

A group of 150-200 men swore at the goalkeeper, who made "hush" sign to them to no avial. Eventually the goalkeeper left the stadium before the game and only returned on the insistence of those within the Turkey camp, claiming that he could suffer extreme punishment by doping regulators. Volkan Demirel complained after he left the stadium, saying "They are swearing at my mother and wife." Fenerbahçe's goalkeeper left the stadium in a Turkish Federation's car and an hour later he turned back. If he had not come back, he would have been heavily punished by UEFA for not joining doping control.

Aziz Yıldırım also called Volkan and wanted him to go back to stadium saying "Even if you don't play, just go back to the stadium" Volkan Demirel is now expected to be punished by Turkish Football Federation in accordance with the Football Disciplinary Guideline. The 'keeper could face a ban of between two and 12 months. While Volkan Demirel was leaving the stadium with fellow Fenerbahçe footballer Emre Belözoğlu, private bodyguards made a scene as fans tried to attack the duo while bodyguards attacked journalists who were trying to picture the pair.

Turkey captain Arda Turan supported Demirel saying "Volkan is of value to this country. Swearing exists unfortunately in every stadium. Every citizen must support this national team's footballers whatever team he or she supports." Turkey's national team head coach Fatih Terim said "We could not have Volkan play in that situation. I demanded he to turn back to the stadium. Because his name is on the roster."