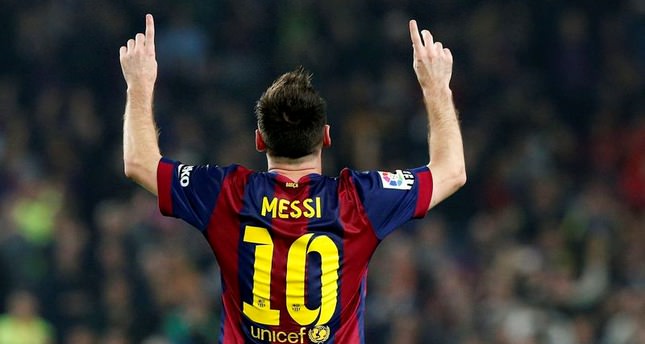 by French Press Agency - AFP
Nov 22, 2014 12:00 am
Lionel Messi has broken Telmo Zarra's 59-year-old record as the leading goalscorer in the history of La Liga with a stunning hat-trick against Sevilla on Saturday.

The Argentine opened the scoring with a trademark free-kick to match Zarra's mark of 251 goals in his 289th La Liga appearance.

He then slid in to convert Neymar's pass to set the new record mark for his side's fourth of the evening and rounded off a special night with a low left-footed effort to seal his hat-trick.

Messi was thrown into the air by this teammates as they celebrated the record in front of over 78,000 fans at the Camp Nou.

Legendary Basque striker Zarra scored his 251 goals for Athletic Bilbao during a 15-year career from 1940 to 1955.

Messi's strike ended an uncharacteristically long three-game goal drought in league action as Barca slipped to defeats against Real Madrid and Celta Vigo and had to come from behind to beat Almeria 2-1 before the recent international break.

However, in between times, he had also equalled Real Madrid legend Raul's all-time record mark of 71 Champions League goals with a double against Ajax earlier this month.

Barca boss Luis Enrique hailed the 27-year-old as "the best player I have seen in my life" after he hit that landmark in Amsterdam.
Messi recently celebrated the 10th anniversary of his debut with the Catalan giants, a period which has seen him win 21 trophies and crowned World Player of the Year four times.

However, he cast some doubt on his future with the club this week when he refused to rule out a move away from the Catalan capital before the end of his career.

"Football is full of unexpected twists and turns," he told Argentinean newspaper Ole.

"It is true that I said I would like to stay there forever, but sometimes not everything turns out the way you want."

Messi's Real Madrid rival Cristiano Ronaldo, who is just one shy of him and Raul in Champions League goals, lies ninth on the all-time La Liga list with two goals in Real's 4-0 win over Eibar on Saturday took him to 197 in just 177 games.