Demba Ba: Win was down to team effort 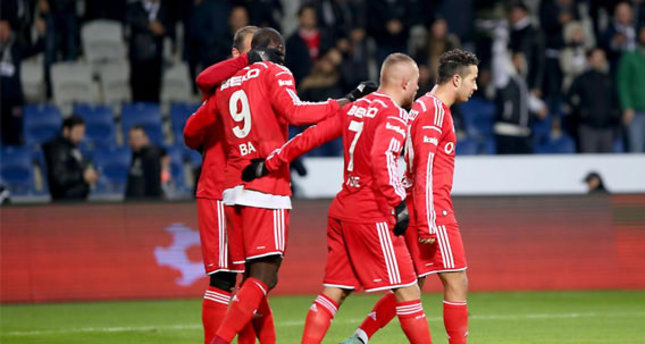 by Kenny Laurie
Nov 25, 2014 12:00 am
Demba Ba refused to take all the credit for his match-winning performance in Beşiktaş's 2-0 victory over Kasımpaşa on Sunday. The Senegalese goal machine scored both of his side's goals in the win, with the first coming from the penalty spot and the second being an instinctive header. The win puts Beşiktaş at the top of the table with 20 points. Despite Ba's heroics, the striker credited his teammates for the win. "This win was not just down to me, the team unity and spirit was the reason we won," Ba said. "We showed a great team performance and I have to give a special mention to Necip Uysal. He has had a tough few weeks but has never once complained about being played out of position. "Necip had to play out of position again; he was a defender today and did a great job filling in. "He is willing to do whatever is needed for the team, that shows what this team is about we are all ready to do our part. "I also train hard every week; I practice my penalty taking and have a number of methods which have helped with my finishing.

"We are first now but what is important is finishing the league in first position."

Playing in the unfamiliar surroundings of the newly built Fatih Terim Stadium - Beşiktaş had been playing at the Atatürk Stadium while their home stadium is being rebuilt - the home side dominated the day's proceedings with Kasımpaşa infrequently threatening. Uysal's goal-line clearance and Ryan Babel's sweet free kick that struck the post were all the away side were able to muster while Beşiktaş showed their title credentials.

Ba's goals came at crucial times, netting from the spot after 28 minutes and getting the two-goal cushion in the 45th minute, crushing Kasımpaşa's hopes.

Beşiktaş have now gone seven games unbeaten whenever Ba has scored, winning six and drawing once with the Senegalese scoring 12 goals in 15 matches for the Black Eagles.

Kasımpaşa coach Shota Arveladze credited the home side for their win and marveled at the pace they played at.

"The game was played at a high tempo, I can't remember such a high tempo game being played in this league for weeks," Arveladze said.

"Both teams competed well but the timing of Beşiktaş's first goal was very important for them.

"After the second goal it became very tough for us but overall we expected a hard game and were given one.

"We had a few good positions as well but if we are to be honest Beşiktaş were the better side.

"I was annoyed with the way we performed and Beşiktaş could easily have been given another penalty so we really have nothing to complain about."

The Fatih Terim Stadium was clearly to Beşiktaş coach Slavan Bilic's taste. The more intimate atmosphere obviously played more into the fiery Croatian's plans than the more Spartan Atatürk Stadium, which is perhaps rather too large for league games.

"If it were up to me, we would play all of our matches at the Başakşehir Fatih Terim Stadium," said Bilic. "We got the win that we deserved. And we got the precious three points. We expected that this match would be difficult for us. Kasımpaşa are a dangerous team. Besides, this match was the first since the international break so I congratulate my players and am content with their performances.

"To be ranked first is good. But it is more important to stay there."

Beşiktaş chairman Fikret Ormans slightly marred the win for Beşiktaş, who ranted about the quality of the refereeing - ignoring new federation rules that are aimed at stopping administrators from speaking out against referees - despite the win.

Speaking on the TRT channel, Orman said, "The mistakes in our matches have been increasing. We are considering ulterior moves. Referees are affecting the results of matches."