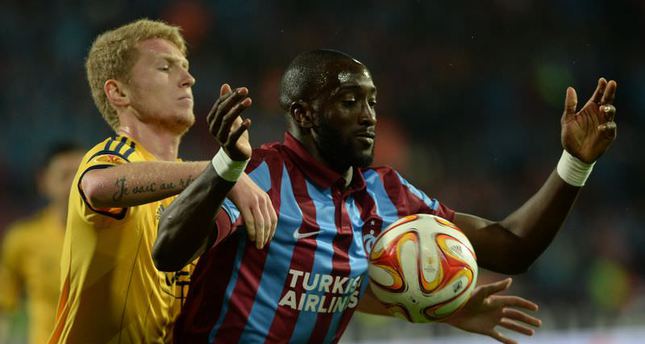 by AA Nov 27, 2014 12:00 am
Trabzonspor defeated Ukraine's Metalist Kharkiv 3-1 on Thursday, and advanced to the next round in the Europa League.

Trabzonspor advanced to Round of 32 in the UEFA tournament.

In the match against Ukraine's Metalist, Algerian defender Essaid Belkalem's header from a corner kick gave Trabzonspor the lead in the game in 36th minute, 1-0. Turkish midfielder Mehmet Ekici made the assist.

In the early minutes of the second half, Metalist winger Pavlo Rebenok missed a great chance.

The visitors scored the equaliser when Volodymyr Homenyuk assisted by Rebenok found the net in the 68th minute, 1-1.

In the 77th minute, Trabzonspor defender Carl Medjani penalised Metalist midfielder Jaja and was sent off after receiving his second yellow card. Trabzonspor were obliged to play with 10 men.

With three minutes to go, Trabzonspor midfielder Mehmet Ekici scored the leading goal for his team. Turkish winger Sefa Yilmaz nodded the ball to Mehmet Ekici smashing from outside the box, 2-1.

In stoppage time, the away team's goalkeeper Olexandr Goryainov found his own net. Trabzonspor player Yusuf Erdogan's shot rattled the bar at first, then hit the goalkeeper and went in, 3-1. This goal sealed the triumph.
Last Update: Nov 28, 2014 10:01 am
RELATED TOPICS