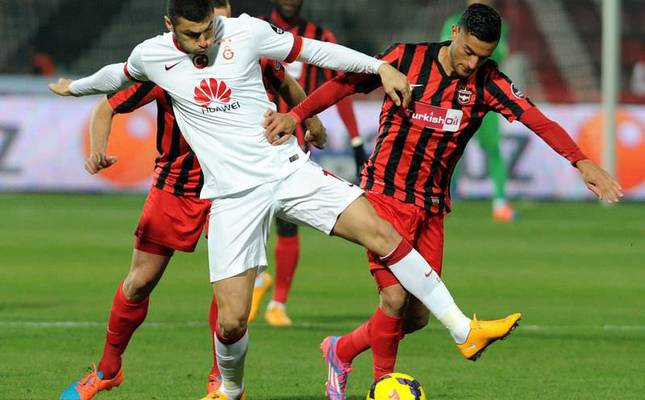 The post-Cesare Prandelli era at Galatasaray got off to a winning start on Saturday with a 1-0 win over Gaziantepspor thanks to a last-minute header from Burak Yılmaz. Cimbom's profligacy in front of goal would not have been to caretaker coach Taffarel's taste but after the sour feeling in the club during Prandelli's reign, Galatasaray will be happy to pick up the points, regardless of how they come. With new Hamza Hamzaoğlu's appointment just around the corner, goalkeeping coach Taffarel stepped up to the hot seat. The away side created a host of chances but routinely fluffed their lines when presented with the goal while Gaziantepspor remained a threat on the counterattack and from set pieces. On the bench, Tafferel was obviously happy to enjoy a 100 percent record as a coach but the former Brazil goalkeeper and World Cup winner is really just looking forward to going back to his goalkeeping coaching duties. "Hamza Hamzaoğlu would be a great appointment, he is the right choice in my opinion," Taffarel said, adding, "I would like to stay here [and] carry on my role working as goalkeeper coach. I do not want to be assistant-manager and will have to decline if an offer is made." The home side was left feeling aggrieved about the defeat with coach Okan Buruk saying that the referee's decision to give Gala a free kick in the last minute - that led to the goal - was unjust.

The resulting free kick led to a goalkeeping era that fell to Yılmaz who looped his header into the goal to secure the points, much to Burak's chagrin. "The foul that led to the goal was not a foul," Buruk said. "The fourth referee told our technical staff that it was not a foul, so I do not understand why he was overruled. There were also a number of dubious yellow cards and fouls that were not given to us. It all built up and was unfair; these decisions had a direct impact on the result. We were the better side for much of the game but we ran out of steam towards the end of the match. The refereeing decisions, however, decided the outcome of the game," Buruk added. During a tumultuous campaign, Taffarel brought a welcome sense of familiarity and cohesion to the team. The former Gala goalkeeper has been around the Turkish league long enough to know what is expected from a title team. Though the coach has no ambitions of taking on a full time manager's role, he did feel he was in a position to make a comment about Prandelli's exit and what might have gone wrong for the Italian while dedicating the win to him. "Every manager has his own style, Prandelli focused on the physical and tactical side of the game,"Taffarel said, adding, "But in Turkey you need to be a good motivational coach as well and [must] specialize in man-management. The players and manager had a few differences in opinion; Prandelli's style of management did not really suit Turkey. I want to thank my players and I salute Burak Yılmaz for his efforts today. We fought hard and did not give up, it was not an easy game but we did enough to win at the end. Each one of my players deserves to be congratulated. This was Prandelli's team, I dedicate this victory to him, he was in charge yesterday so how can I claim credit, Prandelli deserves a lot of respect," Taffarel said. Elsewhere on Saturday, Ryan Babel was twice on the scoresheet as Kasımpaşa beat Çaykur Rizespor 3-1 while Erciyespor clobbered Balıkesirspor 4-0 at home with goals from Kader Mangane, Jacques Zoua, Arnaldo Edinho and Cenk Alkılıç.