Sow to the rescue as Fener grabs late draw 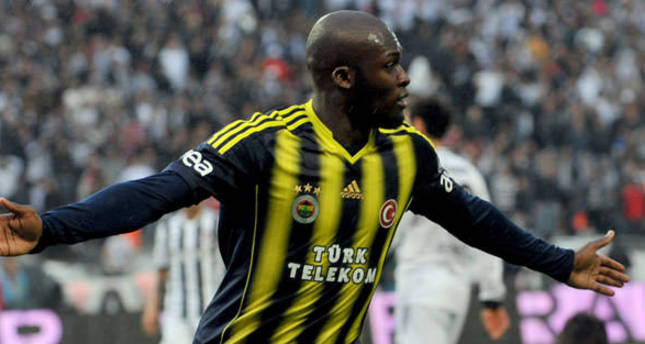 by Kenny Laurie Dec 02, 2014 12:00 am
Fenerbahçe needed a last-second penalty to snatch a home draw against Eskişehirspor in a fiery, controversial game. Moussa Sow scored in injury time from the spot to secure a 2-2 draw and spare Fener's unbeaten home run to 29 games. The penalty just minutes after Fenerbahçe captain Emre Belözoğlu was sent off for allegedly swearing at the referee, although the Turkish international vehemently denied it. The home side are now second in the league behind Galatasaray with 21 points while Eskişehirspor are still in 14th. Erkan Zengin had given the away side the lead in the first half in the 28th minute, taking the advantage into the break. Pierre Webo equalized with 20 minutes left but Fener looked to have thrown away the game a minute after Emre's dismissal when Jose Mori netted with three minutes left. With Eskişehirspor just moments from victory, the away side conceded a penalty that was calmly slotted away by Sow for his fourth goal in 11 games this season. "It was a really tough game, Eskişehirspor performed really well," Sow said, adding, "We struggled as a team, our performance was poor and I feel responsible. I am not going to try and find excuses. I did not perform well and we were quite lucky to finish the game with a 2-2 scoreline. It should not have been like this, we wanted a win at home but have to look forward now." Fenerbahçe İsmail Kartal was not too happy with his players despite pushing their unbeaten home streak into its 13 month. "We started the game well and [had] to be careful because Eskişehir counterattacked very well," Kartal said. "We wanted to win, but were unable to come away with three points. I'd like to apologize to our fans. We have to improve and show that we are the favorites to win this league," he added. The controversy of Emre's send off could end up overshadowing a fascinating game. "I did not swear at the referee and should not have been sent off," Belözoğlu said.