The resistible rise of primitive football 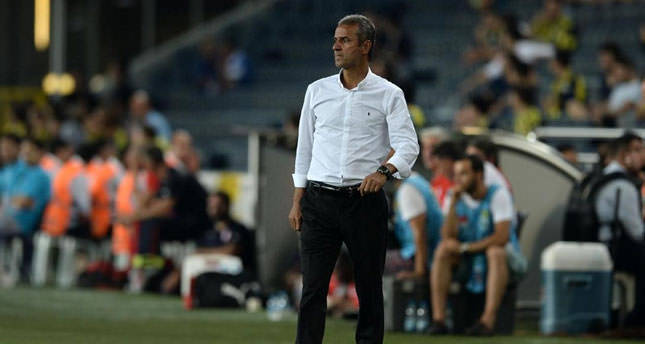 by Arda Alan Işık Dec 02, 2014 12:00 am
After struggling greatly against Bursaspor and Şenol Güneş last week, Fenerbahçe showed no sign of improvement against Eskişehirspor on Sunday night. The game and Es-Es were so predictable, but Fenerbahçe coach İsmail Kartal still made the same mistakes he has been making since the beginning of the season. Last week, a promising tactician, Şenol Güneş, showed us exactly how easy is to dominate a game against Fenerbahçe, nonetheless this was not enough to convince İsmail Kartal to review his strategy.

First of all, when we exclude some fortunate opportunities, no one could say Fenerbahçe were effective against Eskişehirspor. In contrast, Es-Es had a number of opportunities in the first half and eventually scored one goal. The first half was almost identical with Fenerbahçe's previous first halves at home. Despite Fenerbahçe winning all of their home games before the Eskişehirspor game, the team has always struggled to open up the opponent's defense, especially in the first half. What saved the day for Fenerbahçe, until last Sunday, was the tension in the second half and the atmosphere in the Şükrü Saraçoğlu stadium. Despite insufficient strategy and tactics, Fenerbahçe have somehow managed to beat all of their opponents at home. However, if you take into consideration Emre Belözoğlu's behavior that led to a red card, you can roughly imagine the methods that Fenerbahçe used to save the day.

It is also obvious that the team's only hope for scoring a goal is Caner Erkin's crossing combined with a penalty box shark like Pierre Webo. In fact, it is almost identical to the game strategy Beşiktaş employ. Just like Kartal, Slaven Bilic uses Gökhan Töre to create chaos before Demba Ba finishes the chance. However, apart from the few away games in which Fenerbahçe have an open field to utilize Emmanuel Emenike's pace and strength, Fenerbahçe have always struggled to create opportunities. This situation stemmed from both the chaotic game strategy and the player's fundamental deficiencies. Nevertheless, Kartal has a good enough squad at his disposal to create a successful and sustainable strategy.

The most important problem Fenerbahçe have right now is İsmail Kartal's game understanding. He believes a fusion of chaotic game play and his player's individual talent should be enough to see Fenerbahçe through. Nonetheless, football is a team game and no player can handle it on his own. Added to that, just as we saw in the Eskişehirspor game, the chaotic game style only helps the side that does not want to play a patient and dominant game. Given that a team's strategy and tactics must be deployed in a balanced and patient way, Fenerbahçe essentially don't have a strategy at the moment.

The other crucial problem is the bad defensive positioning in Kartal's system. Michal Kadlec and Bekir İrtegün are always standing too close together in the penalty area, while wing players Gökhan Gönül and Caner Erkin more aggressively attack up the flanks. This situation causes two problems; Firstly, because they are being positioned away from their offensive line, they become open to pressing when passing along the defensive line. Secondly, their lack of support to the offense prevents Fenerbahçe ability to attack consistently.

Thirdly, although the football media attributing Eskişehirspor's effectiveness to the absence of Fener defender Mehmet Topal, this was in fact not the case. In contrast, Topal's role at Fenerbahçe is harmful for a sustainable strategy. He basically plays as a third center back and this means the middle of the game for Fenerbahçe is less powerful than with Raul Meireles or Diego. Nonetheless, like most Turkish coaches, İsmail Kartal has defensive priorities and he sacrifices a crucial element of his game for defensive ends. But Raul Meireles has a lot more skills as a playmaker than Mehmet Topal and the positions Eskişehirspor got into were derived not from him but the defensive line.