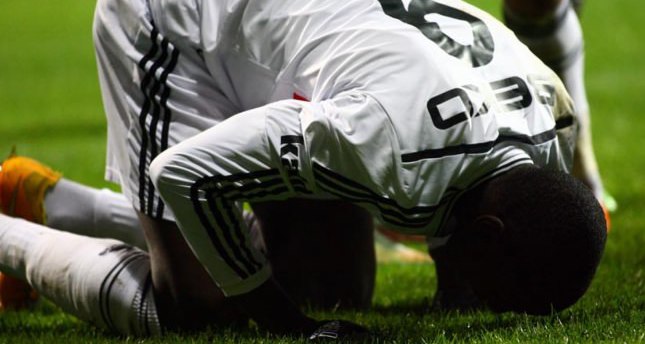 Beşiktaş came out on top of the Turkish Spor Toto Super League after a tough match against Kardemir Karabükspor with Demba Ba continuing his hot scoring form. Trabzonspor’s Cardozo scored a hat-trick to take his tally to eight goals in just six games

The Black Eagles beat Kardemir Karabukspor 2-1 on Monday and advanced to first place in the league's table. Beşiktaş' Senegalese striker Demba Ba scored both goals. The former Chelsea man now has 15 goals in 17 games for the Istanbul club.

Ba's two goals came in a hurry with the Senegales netting in the 53rd and 55th minutes before Musa Çağıran snatched a goal back with seven minutes to go, making for a nervous ending. Despite the positive scoreline, Beşiktaş coach Slavan Bilic wasn't impressed with his side's performance, although he described the win as "important."

"We got the win but I am not really that pleased with our performance," Bilic said.

"Too many mistakes were made in the second half, our finishing was poor, had we focused more we could have easily scored three or four. We struggled to deal with long balls and were really poor in the last 10 minutes.

"Karabükspor showed that they are no pushovers, while we was thinking about scoring a third goal they pulled one back and then we panicked for 10 minutes. We have big goals so must see out games better if we are to realize them. The way we allowed the opposition to box us in was unacceptable but at the end of the day a win is a win and this was an important victory."

Kardemir Karabükspor's single goal came just seven minutes before the end of the game and was scored by midfielder Çağıran.

Elsewhere, Trabzonspor beat Genclerbirligi 4-1 in Trabzon to give new coach Ersun Yanal his second win in two games. Trabzonspor's Paraguayan Oscar Cardozo scored a hat-trick to take his tally to eight goals in just six games for the Black Sea club. After a slow start to the season, Trabzonspor are now up to fifth in the table just five points behind table-toppers Beşiktaş.

Cardozo's first goal on Monday was an early contender for goal of the season with the Paraguayan striker showing off his supreme skill by chipping the goalkeeper from 20 yards out after eight minutes. Özer Hurmacı doubled Trabzonspor's advantage after on the half-hour mark before Cardozo grabbed a second just before half time to give the home side a commanding lead going into the break.

Cardozo rounded off his hat-trick with 25 minutes left before Marvan Celik scored a consolation goal in the 73rd minute.

Elsewhere, Istanbul giants Galatsaray have their eye on New York Red Bulls striker Thierry Henry, who will soon be available on a free transfer.

The Frenchman said that he will take the next few weeks to decide his future while Gala will have to fight off advances from Arsenal, PSG and Monaco for his signature.