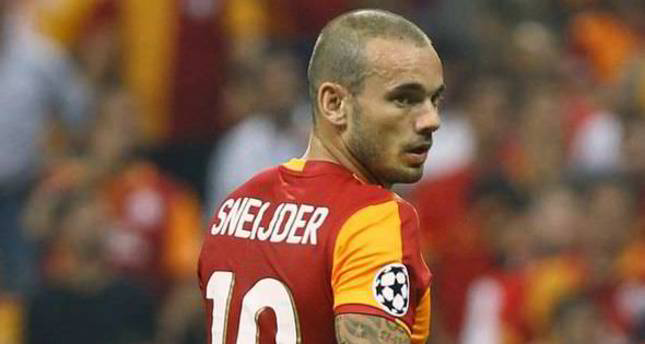 Dutch police staged a drug raid at Wesley Sneijder’s villa in the Netherlands when the 30-year-old playmaker and his wife were in Turkey. Sneijder’s representatives confirmed that no banned substances were found

The villa of Wesley Sneijder, Galatasaray's Dutch star, was raided by police, the Dutch press reported. According to news reports, the raid was carried out last Friday in Utrecht on suspicion of drug possession. The prosecution office has yet to make a statement about the issue. Meanwhile, Sneijder's wife and agent said there was no evidence of criminal activity found during the search. They also said Sneijder is considering suing police for damages.

Intrigue has a habit of following Sneijder. With Italian coach Cesare Prandelli gone, Galatasaray have hired Hamza Hamzaoğlu for the top job, a former Galatasaray footballer and Turkish national team's assistant coach. It was known that Prandelli did not get along well with Sneijder. And Turkish football fans were curious about what kind of attitude Hamzaoğlu would assume with Sneijder. The Dutchman once said in an intervew on Dutch television that "Turkish footballers think too much when they pass the ball." And when asked about Sneijder's statement, Hamzaoğlu said, "Naturally, everybody knows the Netherland's football infrastructure. They have been exporting football stars for years. They became a school in world football. Our footballers may not be as technically good as them. But it is obvious that the are paid much more. One must not forget this notion. They are transferred and paid handsomely for their capacity. But I'm suspicious about whether they deserve the money they get.They must think about it. Does Sneijder run for Galatasaray as much as he does for the Netherlands? He plays only when he gets the ball here in Turkey. Not all things are simple"

Because of these words from Hamzaoğlu, every football fan in Turkey is asking the same question; what kind of relationship will the new Turkish coach and the Dutch star have? When Hamzaoğlu met his players at Galatasaray's training facilities, every member of the squad stood up to shake his hand, except Sneijder. And rumor has it that they are not into each other. However, Hamzaoğlu said to the Dutchman, "You are injured and if you like, you don't have to train." This attitude has helped melt the ice between them, according to Turkish media reports. Moreover, although he is injured, Sneijder has joined training.

Hamzaoğlu also responded to questions about Sneijder, saying, "Foreign footballers are precious. I may have gone too far when commenting about Sneijder. I have no problem with Sneijder"

Sneijder was rested by Hamzaoğlu ahead of an important league game agianst Akhisar.The experienced playmaker led Galatasaray to Turkish Cup glory last season and played an important role in Galatasaray reaching the Champions League second round. Sneijder has one assist and three goals in 16 appearances for Galatasaray this season.

Meanwhile, Hamzaoğlu won his first match in charge of Galatasaray on Wednesday. Galatasaray made a good start in the Ziraat Turkish Cup, beating Eskişehirspor 4-2 in their Group G match at the Türk Telekom Arena in Istanbul. In the fifth minute of the match, visitors Eskişehirspor took the lead after Serdar Özkan's free kick, 1-0.

The home team equalized when skipper Selcuk Inan found the net with a free kick in the 15th minute.

Ten minutes before half time, Pandev was brought down in the box by Semih Güler in the area and the referee pointed to the spot once again. Lions midfielder Inan put the ball in the net to make it 2-1 for his second goal of the match.

In the 83rd minute, Galatasaray's Portuguese wonderkid Bruma's goal gave his team the lead once again. Bruma made the close range shot despite being pressured by three defenders in the area.

By the end of the game, the Lions had made it four. Turkish forward Umut Bulut, assisted by his teammate Emre Colak, struck in the box to make the scoreline 4-2. This goal sealed the victory for Galatasaray. Reigning Turkish Cup winners Galatasaray got three points in their first match in Group G. The Ziraat Turkish Cup, an annual domestic tournament in Turkey, is organized by the Turkish Football Federation. It is open to teams from every division and includes the highest one, Spor Toto Super League, and a lowest one, called the Turkish Football Federation First League.
In addition, there are several teams from the second and third divisions competing in the Turkish Cup.