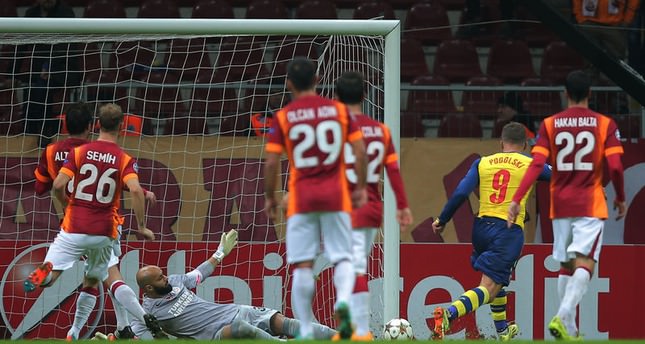 Galatasaray coach Hamza Hamzaoğlu believes his club must invest in new players before they can begin to consider improving in the Champions League following his side's 4-1 humbling at home to Arsenal.

The defeat brought a fitting end to a miserable Champions League campaign for the Istanbul giants. Heavy defeats home and away against Borussia Dortmund and Arsenal as well as a defeat and a draw to Anderlecht left Galatasaray as one of the competition's big disappointments.

An understrength and youthful Arsenal side exposed a team lacking defensive cohesion and spirit, leading 3-0 at half time and mustering their only goal from a free kick - albeit a stunning one from Wesley Sneijder - two minutes from time.

The sorry campaign, following two positive campaigns in the past two years, exposed a certain lack of direction at the club - one that Hamzaoğlu believes could be remedied by new, quality signings as well as internal development.

"We lost three of the players who helped Galatasaray reach the round of 16 last year," said the new Galatasaray coach. "Their absence is not the reason for not qualifying. There are other factors that are more crucial. We need to develop our current players and strengthen some positions in order to look to the future with optimism. There are players who still performed better than I expected on my team. We want to improve as a group, work harder and aim to become stronger. We would like to be successful in the league and the cup. We don't want to let the fans down," Hamzaoğlu added.

Gala can at least take some heart from a decent second half performance where they looked a much better side, even though they were 3-0 down by that point and Arsenal felt comfortable enough to hand two 17-year-olds their debuts.

A rasping drive from Lukas Podolski early on was followed by two Aaron Ramsey goals, one of which was arguably the best goal in the Champions League this year, pushing Gala to ground early on and putting the game out of sight.

"We conceded an early goal, which upset our balance and led to us to not play well," said Hamzaoğlu, and added, "In the second half we played better and became the dominant team. We struggled to find the goal we needed, however. Although we lost, the display in the second half makes us hopeful. I am pleased with my players and thank the fans who came to support us."

Podolski added a second goal late on following Sneijder's sublime free kick. Gala fans will be hoping that maybe the quality of Ramsey's second goal might divert attention away from the crumbling team. The Welshman struck a fierce half volley from 35 yards out after a corner was cleared. The ball whistled off his left foot and past the sprawling goalkeeper who did not have a chance; the Arsenal midfielder described it as the best of his career.

"I said earlier that it wasn't, but I just looked back at it and I thought I was a closer, but I was quite far out. So, yeah, it probably is my best goal ever," Ramsey said.

For the home side, even Sneijder's stunner was enough to gloss over another humiliating loss for Cimbon.

The Istanbul side conceded four goals in four of their six Champions League games this year and never even led the game at any point.

Turkey and Galatasaray midfielder Hamit Altıntop believes the team needs to go back to the drawing board and reassess what the club is doing on the field.

"We haven't been consistent this season," said Altıntop. "We finished how we started. In the past two years we did well, but this season has been a step back in both performances and results. We need to analyze our situation, fix the mistakes in the coming months and do better. No matter how ambitious we are, we have some areas to improve on. We need to accept this. Both on and off the pitch, responsibilities must be shared. If everybody pulls in the same direction, then success will come. Everybody should be aware of this, everybody should look at themselves; we should all be upset. It hurts," he added.

As for Arsenal, they qualified for the knockout stages for the 15th straight time, an achievement of remarkable consistency even if the team's league form continues to be patchy after losing 3-2 to Stoke City on the weekend.

"I am very happy with the game - offensively in particular, we did a good job. We scored some good goals. I was forced to substitute two players," Arsenal coach Arsene Wenger said.