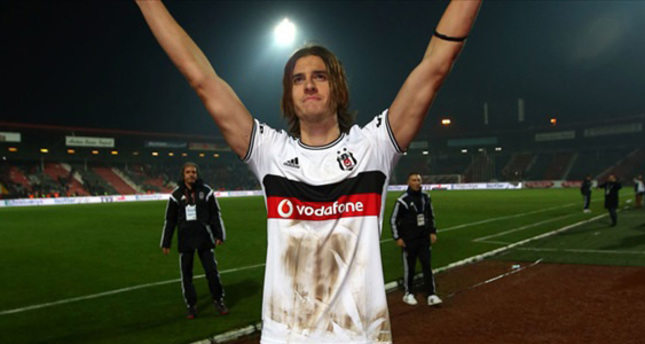 by Kenny Laurie Dec 16, 2014 12:00 am
Beşİktaş defender Atınç Nukan could not hide his emotion after his man of the match performance in Beşiktaş's 1-0 away win over Gaziantepspor on Sunday. The win put the Black Eagles back on top of the league thanks to a fifth straight win and their fourth straight game with a clean sheet. The victory also means that Beşiktaş have won six of their seven league away games, an impressive record and the best such mark in the league. While Oğuzhan Özyakup scored the all-important goal 20 minutes into the second half to grab the win, the plaudits went to young defender Nukan who put in a valiant performance to maintain his side's watertight defensive record.

Following the victory, Nukan was given the man of the match award, a gesture enough to reduce the strong defender to tears.

"I grew up at this club, I made it through the youth teams to the senior team; this was my childhood dream, and when the fans called me over at the end of the game, I was overwhelmed with emotion," Nukan said.

"We knew it would be a tough game and we went into the first half break knowing we had to do better. I tried my best, I don't get a lot of playing time; so, when I found out I would be given a chance, I did not want to disappoint the manager," the defender added.

The youngster has bided his time in breaking into the first team squad, rising from the youth teams and going on loan to Dardanelspor last season. The tall center back credited coach Slaven Bilic for his rapid ascent into the first team. "I have worked very hard in training trying to develop and improve. I finally managed to win the confidence of my manager and he gave me a shot today. The more I play, the better I will become. Slaven Bilic has helped me become a far better player; I have learned so much from him. He always lets me know what I must work on and how I can improve. I am not the man of the match, the team was the star performer," Nukan said.Bilic was quick to point out the contributions of his center back, especially since Nukan's performance was timely after Beşiktaş's 1-0 Europa League win on Thursday. "I want to congratulate my players for their performance today. We were tired from the Europa League game and under a lot of pressure with our rivals winning," Bilic said. "We played our best football in the second half, but what I was most pleased with was the way we defended as a team. Atınç's performance was not really a surprise for us; he has been training very hard and we felt he was ready. He is a huge talent with a promising future," added the Croat. Beşiktaş now sit top of the table, one point ahead of Galatasaray with 29 points after 13 games. The traditional big three of Beşiktaş, Galatasaray and Fenerbahçe dominate the top three with just three points separating them while Istanbul BB are in fourth, six points behind Fener. Elsewhere on Sunday, Kardemir Karabükspor picked up three points against Bursaspor after Abdou Razack Traore's last-minute winner to complete a valiant comeback. Valentin Viola had given Kardemir the lead after 21 minutes before Cedric Bakambu equalized eight minutes later. Fernandao scored in the 45th minute to give the away side the league. Viola brought the scorers level 10 minutes after the restart with a penalty before Traore's winner. Larris Mabiala was red carded in injury time for the victors.

Mersin Idmanyurdu could only pull off a 1-1 draw with Erciyespor. Marko Futacs was on the scoresheet for the Mersin while Anıl Karaer equalized for Erciyespor.