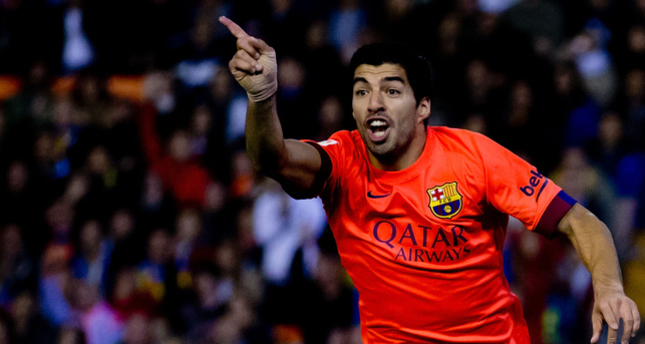 The total cost of the top 10 most expensive football transfers in 2014 exceeded $1.8 billion in 2014. Luis Suarez headed the list after moving from Liverpool to Barcelona for $311 million

While Europe's top football clubs spent more than $3 billion ($3.76 billion) in the recently closed summer transfer window, the total cost of the top 10 most expensive football transfers in 2014 exceeded $1.8 billion in 2014. Operating under the ownership of Perform, a digital sports media company, Goal - the world's largest football website - has announced the top 10 most expensive transfers of 2014.

Moving from Spain to the U.K., Angel Di Maria is in second place on the list and his transfer fee, which exceeded 240 million euros. Third place belongs to James Rodriguez with a transfer fee of 169 million euros.

Having said goodbye to Barcelona and moved to the U.K., Cesc Fabregas is in the seventh place on the list with 126.5 million euros. Juan Mata and David Luiz, both having left Chelsea, had a transfer fee of 122.2 euros and 115 million euros respectively and they are ranked in eighth and ninth place on the Top 10 list. And finally, the 10th place is occupied by Mangala, moving from Porto to Manchester City, with his transfer fee exceeding 111 million euros. There is more to it than the transfer fee. Perform Turkey Managing Director Emre Uğurlu says that the numbers don't only refer to the transfer fees but they also reflect a wider perspective. Uğurlu indicates that all foreseeable costs in the contracts are included in these fees and commented, "This list prepared by Goal, the world's largest football website, has benefited from extremely comprehensive data. These fees include all costs that are not obvious at the beginning such as taxes to be determined, according to the tax code of the country, to which the player is transferred, extra fees to be paid to the players once certain requirements are met and managers' commissions. Last year, total cost of the top 10 most expensive transfers was 1.2 billion euros. This year, with an increase of over 20 percent, this figure has climbed up to 1.5 billion euros."

Emre Uğurlu stated that the total cost of the biggest 10 transfers in 2014 was greater than the total market values of the four biggest football clubs in Turkey. "The total of market value of Beşiktaş, Fenerbahçe, Galatasaray and Trabzonspor is near 666 million euros, which can only compensate for the transfer fees of the top three names in the list."