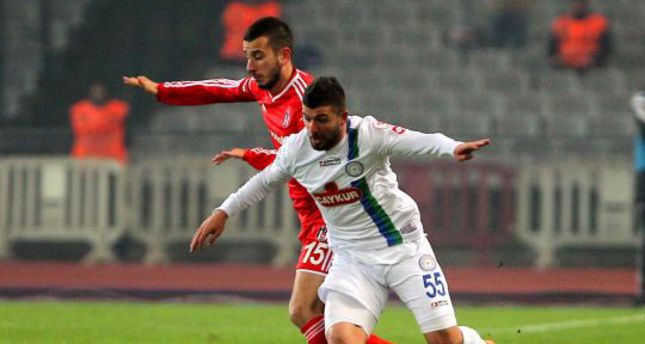 by Daily Sabah Dec 20, 2014 12:00 am
Çaykur Rizespor stunned Beşiktaş at the end of the Ziraat Turkish Cup's match day two on Thursday night as the Black Eagles lost 1-0 in their Group F match at the Atatürk Olympic Stadium. The scorer for the visitors, Çaykur Rizerspor, was 33-year-old Congolese forward, Lomana LuaLua. The narrow defeat dropped Beşiktaş into the runner-up position in the group that is now led by Çaykur Rizespor. Beşiktaş did have some mitigation, playing with mostly substitutes. Competing in Group B, Trabzonspor drew against Akhisar Belediyespor 0-0 in Trabzon. Meanwhile, Istanbul team Galatasaray smashed lower division side FBM Makina Balçova Yasamspor 9-1 in an away match in İzmir on Tuesday. The home team took the lead in the Group G game, however, the Lions blazed away at FBM Makina Balçova Yaşamspor by scoring nine goals. Galatasaray's Macedonian forward, Goran Pandev, scored a hat-trick in the rout. Also, 20-year-old Galatasaray left winger Sinan Gümüş scored on his debut. Another Istanbul club Fenerbahçe defeated lower division team Bayburt Grup Özel İdare Gençlik ve Spor 3-1 in Group E match Tuesday. The Yellow Canaries' Cameroonian forward Pierre Webo scored twice in the win. The Ziraat Turkish Cup is a domestic competition organized by the Turkish Football Federation.