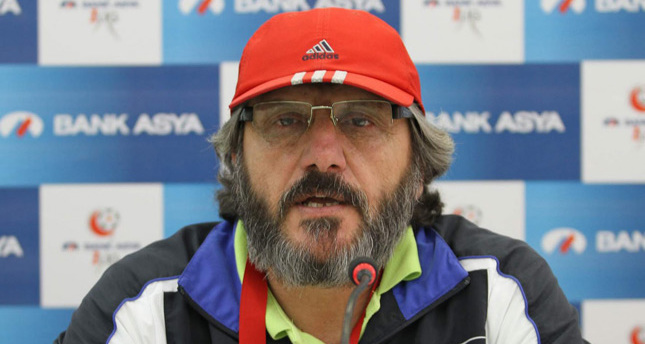 by Arda Alan Işık Dec 23, 2014 12:00 am
Mustafa Reşit Akçay is an interesting figure in Turkish football. His success at 1461 Trabzon brought him to the "real" Trabzonspor last year, but chairman İbrahim Hacıosmanoğlu was not patient enough to keep Akçay and didn't deliver the loyalty he had earlier promised. However, I find Akçay both an interesting and respectable figure in Turkish football because I do not believe that any other Turkish coach can make this statement: "People are too concerned in outlook in this country, to protest this I prefer an anarchistic look." However, just like his lifestyle, his football style has a philosophy too. At both Trabzonspor and his present club Akhisar Belediyespor he tried to implement his strategy and paid the price for it. Nevertheless, that is what idealist coaches do and Akçay is one of the few coaches who completely dedicates himself to his work.

At Akhisar, his current struggle is almost identical to the one he suffered at Trabzon. Theoretically, the team is playing decently, but practically the ancient deficiencies of Turkish football pop up in this small town in Manisa. Although, I have great respect for Akçay's ideals and his way of perceiving football, I think he must change a few points to avoid an unpleasant result.

First of all, the kick-and-rush tactic of ending a patient and dominant attack is not logical. Contrary to most Anatolian teams, Akhisar and Akçay are trying to dominate the game, which for me is something to be proud of. Nonetheless, wasting this plan for a simple "kick the ball to Gekas" tactic is not what this team and Akçay deserve. Despite Akhisar's dominant role in the game, this ineffective tactic was the main cause for their inability to find opportunities against Beşiktaş.

Another thing is, given that the Akhisar players have not fully learned their coaches plan yet, their dominant role in the game has become vulnerable to counter-attacks. Again, the kick-and-rush way of finding opportunities is mainly responsible for this fact. If Akhisar had been more patient about final passes and had worn down Beşiktaş a bit more, their opponent would have had to stay in their own half. However, the reality was different and Beşiktaş found a lot of opportunities from both collective and individual mistakes of Akhisar.

Seeing as the main protagonists of Akhisar's attacks are Theofanis Gekas, Bilal Kısa and Merter Yüce, Akçay has to find a system that encourages pass circulation among these players. Especially between Merter Yüce and Bilal Kısa, because Beşiktaş found at least two or three opportunities from the uncertainty between Yüce and Kısa. The problem mostly derived from Yüce's individual mistakes but what actually created this problem was Yüce's solitude in front of the defense. However, his position is crucial for Akhisar's plans because everything good starts from him. Defensive players mostly avoid making effective passes and they usually make meaningless passes among themselves, and that is why a bridge between offensive players and defensive players is so important for just about every team in the world.

When Hamza Hamzaoğlu was in charge, Akhisar was an impressive team like today, but Hamzaoğlu's ways were different from Akçay's. Back then, Akhisar were a compact and fast team but today Akçay is trying something different, something that could take Akhisar to another level. That is why he should avoid using Hamzaoğlu's tactics to improve his team's game. These tactics were part of a different plan and, as we can see, they do not work in a different and complex plan. It will be much more beneficial for Akhisar and Akçay trying to create more collective tactics to implement their strategy.

Tolga Zengin's save from Gekas' header was a combination of good positioning and reactions. But his way beginning possessions is still unacceptable. When he kicks the ball into the opponents half, he just finishes off the opportunity of creating a organized attack for Beşiktaş. On the other hand, Akhisar goalkeeper Oğuz Dağlaroğlu was successful in commanding his area but his mistake in Jose Sosa's freekick goal was unacceptable for a 35-year-old goalkeeper.