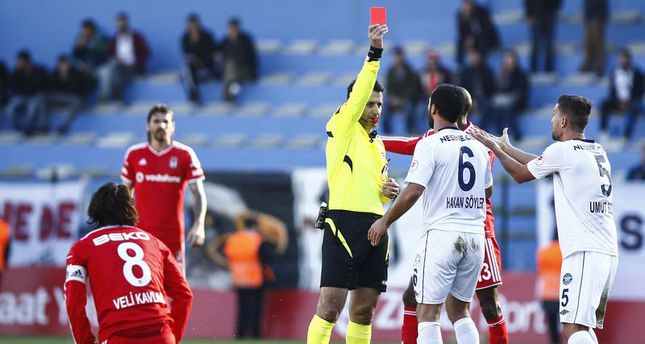 Beşiktaş footballer Veli Kavlak prevented his rival Adana Demirspor's player Hakan Söyler from being shown a red card after he told the referee that Söyler had not committed a major foul. Beşiktaş to be nominated for Turkey Fair-Play Award

A historic moment took place at the Turkish Ziraat Cup match on Wednesday between Beşiktaş and Adana Demirspor when Veli Kavlak spared an opponent a red card. Adana Demirspor defeated their powerhouse rivals 2-1, but the more important thing was that Beşiktaş player Kavlak's rare show of sportsmanship. In the 21st minute of the match, Adana Demirspor's midfielder Hakan Söyler pushed Kavlak to prevent him from getting the ball. The referee Suat Aslanboğa thought the foul worthy of a red card and gave Söyler his marching orders. However, Kavlak conspired against his team for the sake of sportsmanship and objected to the referee's decision, protesting that it was not a major foul, even though his team was behind 1-0. The referee changed his decison and the red card turned into yellow for Söyler.

The Turkish public and media praised Kavlak's behaviour and World Fair-Play Committee Member Erdoğan Arıpınar said Beşiktaş would be nominated for the Fair-Play Award of Turkey. He said, "When Veli Kavlak made an objection, his team were down 1-0. So, this increases the significance of his fair play."

Regarding this fair decision, Beşiktaş published a statement through its official Twitter account saying, "Following the foul of Hakan Söyler, the referee showed a red card, but our players rejected the decision for change." Beşiktaş TV's official Twitter account also released a similar statement, "Are you now proud of yourself, Beşiktaş fans? Play with honor and win with justice. We never say these words to no avail."


Kavlak made a statement on Beşiktaş's official website. He said it was not a major foul and was surprised to see a red card. "We both went for the ball, he pulled out of the challenge and prevented me from getting injured," Kavlak said. "When the referee showed the red card I was surprised and did not know what to do. Olcan Adın and Ersan Gülüm came over and then I went over to the referee and told him that no contact was made. The referee thanked me. We always talk about bad behavior in football, hopefully this will give something positive to talk about. It did not matter that we were losing 1-0 at the time, it was the right thing to do. I want to thank my teammates and manager for understanding my decision. Hopefully trying to deceive the referee will become a thing of the past" he said.

The Turkish Football Federation (TFF) also released a statement praising Veli Kavlak for being an ambassador of fair play. The statement read: "Veli Kavlak acted as a role model to all footballers today when he told referee Suat Arslanboğa that Adana Demirspor player Hakan Söyler had not fouled him. The referee was able to rescind his decision and allow Hakan Söyler to complete the game.


"The Turkish Football Federation would like to thank Veli Kavlak, he acted as an ambassador for fair play with his actions and hopefully he serves as an example to all."

Beşiktaş's press secretary Metin Albayrak said Kavlak's behavior is what Turkish football needs to see. "Kavlak's attitude is an important step for the development of Turkish football. He showed the humanitarian stance of Beşiktaş and his behavior will act as an example. To win a match, it is not necessary to try to win by all means possible. You have to play with honor and win with justice. This is the principle of Beşiktaş. I congratulate Kavlak for his attitude," he stated. Beşiktaş's striker Cenk Tosun wrote a message on Twitter, saying "That is why we support Beşiktaş."