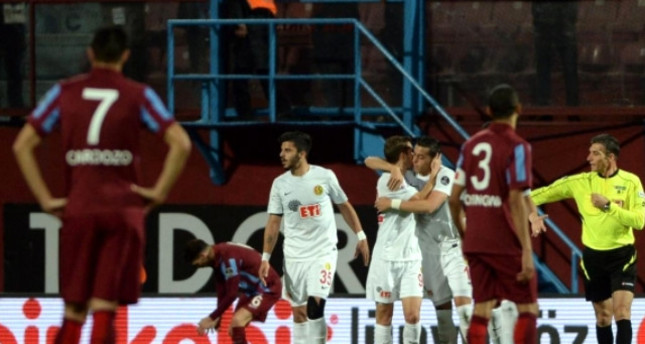 The Black Sea Storm were hammered 4-1 by Eskişehirspor on their home turf. The result brings Trabzonspor crashing back down to the earth after a strong start under Ersun Yanal

Turkish Super League's 15th week ended with a surprise result as one of the Turkey's powerhouses, Trabzonspor, were hammered 4-1 by Eskişehirspor in their home turf on Monday.

Ertuğrul Sağlam's side won their first game after a four-match run without a victory. Eskişehirspor have moved up to 12th spot with the win. Eskişehirspor manager Sağlam believed that Trabzonspor's naivety was to blame for their 4-1 loss.

"Trabzonspor play great football at the highest level," Sağlam said following the game. "However, they have as many weaknesses as they have strengths. "When they lose the ball in the final third, they press hard but when we evaded their press, we were left with a lot of space on the counterattack. Trabzonspor were a little naive. "We analyzed Trabzonspor's game closely over the past week and prepared well for the game. The first and fourth goal were exactly the type of goal we were trying to score." Sağlam believes the win could help propel his side into the top half of the table after the winter break.

"We pulled off a great win today but we have played well against all the top sides," Sağlam said. The visitors were on top for much of the game and never trailed to the hosts. Mori gave Eskişehirspor the lead in the first half just after the half-hour mark, beating İbrahim Demir in the 32nd minute. The visitors took a 1-0 lead into the half. The game turned into something of a feast for the neutral in a five-minute spell between the 73rd and 78th minutes. Ömer Şişmanoğlu doubled Eskişehirspor's advantage in the 73rd minute before Özer Hurmacı pulled one back for Trabzonspor just three minutes later. Hope was soon dashed for the home side when Şişmanoğlu grabbed his second and Eskişehirspor's third in the 78th minute to cap a frenzied period of activity in front of goal. The result brings Trabzonspor crashing back down to the earth after a strong start for Ersun Yanal in Trabzon. After four wins in his first five games, Trabzonspor have drawn and lost their last two games, leaving them in sixth place and losing ground on the league leaders.

Yanal lambasted his players after the game and encouraged them to be more self-critical.

"I was not expecting us to be this poor," Yanal said. "We fell to pieces after the second goal, we lost discipline, we are to blame, there are no excuses we need to take responsibility. I was really disappointed with the way we lost our discipline and organization, it really was unacceptable. "I did not recognize my players today, it was not like us, we need to analyze what went wrong and make much needed changes. "We congratulate ourselves so we must learn to be self-critical when we lose. Losing can be beneficial when you take the necessary lessons."

Although Trabzonspor were Turkey's most active club in the transfer market over the summer, being able to bring in proven veteran Oscar Cardozo while 22 players either joined or left the Black Sea side, Yanal has yet to make a signing since arriving early in the season. But the former Fenerbahçe man is looking to bring in bodies of his own. Trabzonspor manager Yanal even revealed that he has asked the board for a few January transfers. "It would be wrong to share transfer news here," Yanal said. "However, we will take our proposals to the board so just give us some time and let us see what happens. "We have not received any offers yet for any of our players." Yanal also confirmed that the board have transfer listed a few players and that there could be outbound transfers in January. Despite the defeat and mild loss of form, Yanal still thinks his team can catch up with the big boys, even though league leaders Beşiktaş are 13 points ahead of them. "We will close the gap with the leaders," Yanal said. "But we have to focus on the now and the reality is we must improve. Everybody has to train harder, everyone must put in more effort. I do not want anyone on this team who is not going to do his part for the team. We start with 11 players and nobody should expect to be carried, everybody has to do their bit. We will be changing our training methods and will start the second half of the season with a new lease of life."