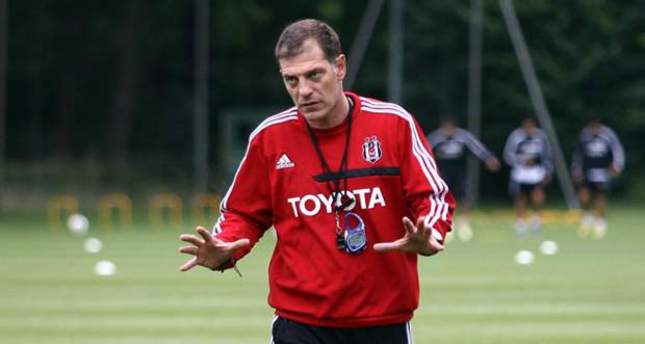 All eyes will be on the Beşiktaş-Galatasaray derby on Sunday. Beşiktaş’s head coach Slaven Bilic, who has never won a derby match, is looking for his luck to turn this time around

Turkey's powerhouses Beşiktaş and Galatasaray go head-to-head on Sunday as the two sides vie for top of the table glory while Beşiktaş head coach Slaven Bilic, who has never won a derby match, is looking for his luck to turn this time around.

Bilic has so far enjoyed nothing but success this season. His side are sitting pretty at the top of the table while enjoying a seven-game league winning streak, and in the Europa League, Beşiktaş topped their group thanks to a superb home win over English side Tottenham Hotspur. However, he still lacks something important on his Turkish resume: A derby win. Since Turkish football fans who supports one of the three big teams, Fenerbahçe, Galatasaray and Beşiktaş, attach great importance to derby wins, the prize for winning on Sunday is so much more than just three points and a retention of their top spot. Now, all eyes will be on the Beşiktaş-Galatasaray derby on Sunday.

Bilic started his Beşiktaş career in the 2013-2014 season. Beşiktaş played five derby games under Bilic's management and left the field with two draws and three defeats. The Croatian coach experienced the same misfortune in Russia when he managed Lokomotiv Moscow. He could only get one win with Lokomotiv Moscow, and suffered four defeats and one draw.

Beşiktaş's biggest hope in the derby game is their Senegalese forward Demba Ba. Beşiktaş's ascent to the top of the table has been down, in large part, to the goals scored by Ba. The striker brought Beşiktaş three wins and two draws in the European arena thanks to his goals. He scored his last goal against Trabzonspor on Dec. 7 before he was injured in unfortunate circumstances. The Senegalese has since returned from injury and his teammates did not miss a beat in his absence, continuing their winning form.

Beşiktaş have a special affinity with the last 30 minutes of games while Galatasaray tend to find the net mostly in the last quarter of the game.

According to data released by Transfermarkt, Beşiktaş and Galatasaray are worth TL 727 million ($311 million) combined. Galatasaray is the most expensive team in the Turkish League with their valuation of $195 million. Beşiktaş's total value is estimated at $115 million. Beşiktaş's most valuable footballer is Demba Ba with his $9.5 million transfer tag while Galatasaray's most valuable figures are Wesley Sneijder and goalkeeper Fernando Muslera, worth $22 million each.

Elsewhere, Eskisahirspor's Erkan Zengin is expected to move on in January with clubs in Turkey and Italy showing interest.

Zengin's agent Patrick Mork told a Swedish newspaper that he expects his client to move on in the next month.

"I believe Erkin will sign for a new club in the upcoming transfer window. Eskisehirspor have a serious financial debt to my client," Mork said, and also claimed that Lazio and Genoa have been in touch about the player's availability.

Another target is Trabzonspor, although their manager Ersan Yanal remained coy when asked.

"I am not in a position to disclose our transfer targets. The board members are the ones that make these decisions. But if you want my opinion on Erkan, he is a quality player and we could really do with someone like him on our team. He would be a great transfer in my opinion," said Yanal, according to Turkish-football.com.